Say You’re Sorry is the latest novel in Michael Robotham’s series of books featuring clinical psychologist Joe O’Loughlin.  This book finds Joe helping with the investigation of a present day murder that seems to have ties to a past case involving two missing girls.  While the girls have been missing for three years, the fact that the most recent
murder has occurred in the farmhouse that Tish McBain (one of the missing girls) used to call home makes Joe suspect that the cases may be related.  When it turns out that a new unidentified victim found in the woods near the farmhouse is actually Tish, the tension skyrockets as investigators struggle to find Piper Hadley (the other missing girl) before her time runs out.

Michael Robotham has chosen to use two different narrative techniques to write this novel.  There is the real-time storyline of the investigation as it leads Joe, his best friend Vincent Ruiz, and the local cops from the farmhouse murders to the case of the abduction of the two girls.  And that alternates with diary-like entries written by Piper Hadley as she describes the conditions of her imprisonment and the harsh treatment the girls suffer.  Eventually, these two narratives begin to dovetail very effectively into one propulsive storyline moving forward.  The closer the reader gets to the end, the faster they must turn the pages.  What more can you ask of a thriller? 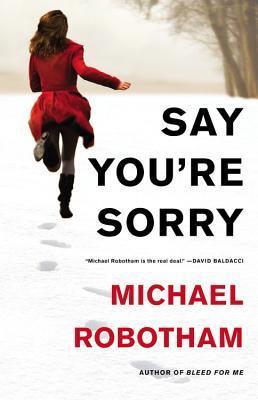 At the same time that all of this is happening, Joe is also trying to deal with parenting issues concerning his oldest daughter Charlie.  She has been dating the wrong boy and his ex-wife would like him to have some heart-to-heart talks with her.  Needless to say, when Joe must follow-up on an important investigative lead, he is forced to call in Vincent to pick up Charlie from a curfew-breaking late-night excursion.  The case itself is also causing Joe to flashback to a past case where his involvement resulted in Charlie being held captive and mistreated.  His guilt over this becomes a greater burden the longer the search for Piper drags on.

Long-time fans of the series will remember that Joe is dealing with the on-set of Parkinson’s disease and the shaking which accompanies this.  As the condition continues to create troubles, the case does cause Joe to stumble upon a lead on a clinic doing some experimental research on the disease.  This will likely come more into play in future books in the series.  Robotham continues to impress with his ability to allow the reader to truly feel what this disease might be like and how it so drastically alters ones life.

Michael Robotham has done a good job of creating conflict within the police force, as Joe is felt to be unnecessary by many of those involved in this case.  While this is a common theme in the genre, Joe is such an incredible likeable character that readers can’t help but want him to prove these guys wrong.  By the end of Say You’re Sorry, Joe has been fundamentally changed and it will be exciting to see how this affects his future.