This winter, The Kennedy Center for the Performing Arts in Washington, DC is running an international festival called Nordic Cool 2013.  The festival dates are February 19-March 17.

Nordic Cool 2013 is a celebration of all creative art forms from the Nordic region.  Of particular interest to BOLO Books readers is a literature panel which ran on Sunday, March 3.  The panel session I attended, called Nordic Crime: Ice, Volvos, and Murder, was moderated by Andrew Nestingen and featured authors Johan Theorin, Agnete Friis, and Lene Kaaberbol.

Mr. Nestingen is an associate professor of Scandinavian Studies at the University of Washington and began the session by talking a bit about the region and the crime fiction which it generates.  Of particular note was the statistic that the entire region comprises just 25 million people.  Mr. Nestigen likened the crime literature of the region to the Volvo car – in other words – their crime fiction is a high quality product.  He also made note of how much the literature of the region focuses on social criticism and in particular how the crime fiction seems more concerned with “why done it” rather than “who done it.”

The ninety minute panel then proceeded in the standard question and answer, conversational mode you would experience at any of the various crime fiction conventions.  I will just highlight a few of the more interesting tidbits shared in the session.

Lene Kaaberbol talked about how she came to crime fiction because of a vivid image that came to her which wouldn’t go away.  That image, of a boy in a 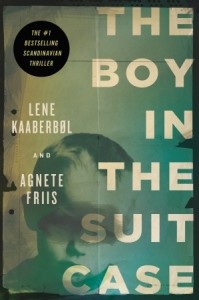 suitcase, became the basis of the first Nina Borg novel she wrote with her co-author Agnete Friis.  Both of them were previously solo authors but decided it was good idea to have company when diving into the unknown waters of crime fiction.

Johan Theorin also talked a bit about how he came to crime fiction.  He wanted to write more about the victims (not just the nuts and bolts of police work and the statistics related to that).  His family was a family of storytellers and so storytelling became a constant feature in his novels.  They also love to tell ghost stories which led to the use of the supernatural in his mysteries.  Theorin described society as a lake.  If you drop a stone in, the ripples reveal much under the surface.  He says that In crime fiction, the crime is the stone and it helps to reveal more about what is going on than just things related to the crime itself.

When asked by Andrew why so much crime fiction is being created in a region that has very little actual crime, all three authors weighted in.  Kaaberbol wanted to make clear that there is no correlation between the number of crime novels and the amount of actual crime.  She pointed out that with only 1.5 murders a year in Iceland, all of the good crime fiction authors of that country would be fighting over who got to tell the story if that were the case.  Friis seemed to think that it has something to do with how safe and secure

citizens felt, thereby allowing them to explore these topics more freely.  Finally, Johan Theorin pointed out that the real murder of a member of Parliament may have helped launch the Nordic crime wave.  Shortly after this shocking  incident occurred, Henning Mankell’s first book appeared and many others followed.

Agnete Friis went on to explain that the Nina Borg books are designed to Investigate the invisible layers of society, the ones that the even the regular citizens don’t know or think about.  Both she and Lene mentioned that they wanted the reader to feel empathy for the plight of their characters.  Kaaberbol went on to say that while exposing social flaws/ills is indeed a function of their novels, first and foremost, they are writing for entertainment.

Mr. Nestingen then asked about the constant role of children and childhood trauma in crime stories from the Nordic countries.  Agnete was quick to point out that children are the perfect victims because they are the most innocent of all and are so vulnerable that anyone would want a wrong involving them to be righted.  Johan responded by adding that being a parent himself, he does have fears for his offspring and that is manifesting itself in his novels.  Friis continued on to say that no subject should be taboo, it all just depends on how you tell the story and why you are telling it.  Her writing partner Lene agreed and stressed that above all it must not be exploitative.

When asked about the nature of time in their novels, Lene Kaaberbol talked about how the cinematic style and quick pace of their novels came from both author’s background in children’s literature.  Asking questions at book events for children, she found out that boy readers will give a book about one page before giving up if they are bored.  One librarian told her a story about a boy who requested a book “where the story starts right away.”  In other words, you better grab the reader right from the start and she believes that adults deserve the same respect for their time.  Johan simply feels that storytelling takes its own time, but it must not be too long or too short.  Naturally, he pointed out with a laugh, his novels get it just right.

Finally, when Andrew Nestingen asked about the future of Nordic crime, all authors were optimistic that it would continue to grow and diversify.  Johan did say that Swedish crime fiction needed a George Pelecanos-type, who would help expose the troubles faced by all levels of society within Sweden.

(It should be noted that Mr. Nestingen also moderated a later session of this panel with authors Jarkko Sipila and Vidar Sundstel questioned but BOLO Books was not in attendance for that session.)