April brings the release of Fangs Out, by David Freed.  No, this is not the next book in the sparkling vampire trend that has swept the nation.  Fangs Out is the second novel in David Freed’s Cordell Logan mystery series.  While there are indeed dead bodies, I can assure you that there are absolutely no un-dead present.

As the novel begins, Cordell Logan is working as a civilian flight instructor in central California.  After Cordell helps to prevent an airborne tragedy, Hub Walker asks him for a favor.  Before Cordell knows it, he finds himself flying off to San Diego in full investigator mode. 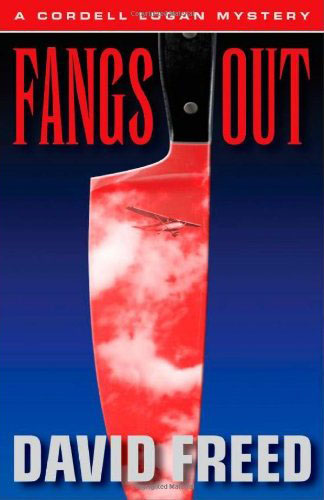 It seems that some time before, Hub Walker’s daughter Ruth had been murdered. Just moments before being executed, the convicted murderer revealed that the real killer was Hub’s close friend, Greg Castle.  Supposedly, Greg’s motive was to cover up his years of skimming money from his US Defense Department contracts.  But Hub is not convinced and firmly believes that this was a guilty man grasping at one last straw. Now he wants Cordell Logan to find a way to prove it.

In Cordell Logan, David Freed has created an extremely like-able, everyday hero with a quick wit and a compelling backstory.  Cordell is estranged from his wife, Savannah, and some of the most well executed scenes in the novel center on these two and their very human problems.   Like most people, Cordell is a flawed individual and it is a pleasure to see that vulnerability in a hero.

Along with this case-study of an adult relationship, Fangs Out also presents a captivating mystery.  Cordell if forced to interact with a collection of very unique characters, some of them suspects and some of them friends.  Freed manages to imbue each of them with the correct traits that make them not only memorable, but also very real.

Those readers familiar with San Diego and La Jolla in particular, will relish the chance to spend some time hanging out on California’s coast.   Hub Walker owns a mansion, which he shares with his former Playmate-of-the-Year wife Chrissy.   With the descriptions of its placement on the cliff, the mansion sounds like the perfect place to enjoy the sunset.  Freed brings this beach town to vivid life, making this a perfect summer book.

It can always be tricky for authors with a specific technical background to work this into the plot of a novel, but David Freed creates several plausible reasons for Cordell to take flight in the novel.  While I am sure that the details of airplane mechanics and flight specifics will be even more meaningful to those readers with knowledge of such things, Freed presents them in a way that is easily understandable to those of us without a background in aeronautics.

Filled with humor and pop culture references, Fangs Out is a quick read that will leave even the most jaded reader eager for Cordell’s next adventure.  Oh, and about that title.  You are just going to have to read the book to find out what that term means.

Disclaimer:  A bound galley of this title was provided to BOLO Books by the author.  No review was promised and the above is an unbiased review of the novel.