It has always been profoundly difficult to classify the novels of Stephen King.  They often cross the boundaries between horror, mystery, and literary fiction.  But at the heart of all of them are incredible characters that become a part of the reader’s psyche from that moment forward.  There are characters like Randall Flagg, Jack Torrance, Annie Wilkes and Dolores Claiborne, each of whom no reader can forget.   And in many ways, all of King’s stories are coming-of-age tales.  Obvious examples include Firestarter and “The Body” (later adapted to film as Stand By Me), but really all of his work deals with individuals who must grow in order to survive.

All of these elements make their appearance in Stephen King’s latest novel as well.  Joyland is being released as a paperback-only title from Hard Case Crime.  Some of King’s more touching and intimate stories have come at this later stage in his career, and Joyland is a perfect example.

Joyland reads as if it is a memoir – not of King, but of his newest creation, Devin Jones.  Told from the perspective of Devin as an older man, the novel recounts the story of his experience working at a North Carolina amusement park.  It begins in the early 1970’s when Devin is starting his summer break from college.  His girlfriend is headed off to her out-of-state job and Devin struggles with what to do.  Then he finds employment at Joyland.

“This is a badly broken world, full of wars and cruelty and senseless tragedy…Given such sad but undeniable facts of the human condition, you have been given a priceless gift this summer: you are here to sell fun.” (Joyland, 59) 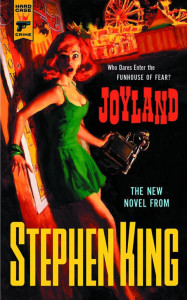 Inspired by the message of the place, Devin jumps full throttle into his new position.  Quickly discovering kindred spirits among the carny folk, he learns their secret language and becomes a vital part of the carnival scene.  He finds himself excelling at “wearing the fur” – dressing up as the carnival mascot, Howie the Happy Hound.  But because this is a Stephen King novel, readers know that all will not remain copacetic.

It seems that in the summer season prior to the start of the story, a murder occurred in the Horror House portion of the park.  The culprit was not caught and many believe that the ride is haunted by the ghost of the dead girl.  Spurred on to investigate this crime, Devin and his friends uncover evidence that this may be the work of a serial killer.

At the same time all of this is going on, Devin is also dealing with the idea of being separated from his girlfriend.  The carnival fortune-teller has foretold of several encounters which Devin has brushed off, until they actually start to happen.  When he meets the mother of a sick child, he knows that this is his destiny.

Stephen King has been quoted as saying that the inspiration for this novel was a scene of a boy in a wheelchair, flying a kite.  When readers reach that section of the novel, they will completely understand.   It is one of the mostly fully realized and exquisite scenes in all of King’s oeuvre.  If you read Joyland for only one reason, let it be to experience the kite-flying scene; but trust me when I tell you there are many more reasons to read this novel.

Joyland is unlike any of Stephen King’s previous books and will probably be unlike any books that follow.   Juxtaposing the aging amusement park with the coming-of-age of Devin is simply genius.   It is a story of destiny, of humanity, and of righteousness.  Told in the most honest of ways, Devin Jones becomes so much more than a character, he becomes a real flesh and blood person.  And is there any better praise to bestow upon a writer?