Imagine a group of teenage girls joining together to exact revenge on one wealthy family they believe to be responsible for wrongs perpetrated against a member of their clique.  That is the premise of the new young adult novel, This is W. A. R., by Lisa and Laura Roecker.

As This is W. A. R. begins, a party on the Gregory family yacht has ended in tragedy.  Willa Ames-Rowan has drowned and all of the guests saw her leaving on a smaller boat with James Gregory.  It would seem like a cut and dried case, except for the fact that the Gregory family wields power and influence with their money.  In fact, this is not the first time that the family has escaped from controversy completely unscathed.  Yet, in this case, four unlikely allies are pulling together to make sure that James doesn’t get away with murder. 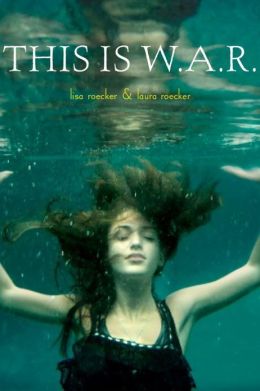 Sisters Lisa and Laura Roecker, have chosen to tell this story in a Rashomon-like format in which each of the four girls give their own account of the action leading up to and during the deadly yacht party.  It is to the Roecker’s credit that each of the sections has a distinct point-of-view and each of the girls, a unique perspective.  For example, it would be impossible for readers to confuse Rose, the loner of the group with Madge, the sister of the victim.  Likewise, the other two girls, Lina and Sloane, each have a voice all their own and the action in their sections rings true to their characters as established by the plot.

Inspired by the one common bond they all share, the four wanna-be vigilantes name their crusade W. A. R. after their lost friend, Willa Ames-Rowan.  Together, they set out to sabotage the Gregory family and expose them as the hypocrites that they are.  Needless to say, all does not go according to plan.  Friction and division within the ranks begins to erode away the true intention of the W. A. R. and the girls may have fatally underestimated the ability of the Gregory family to protect one of their own.

Playing to their audience, Lisa and Laura Roecker pepper the plot with additional dilemmas faced by teenagers today.  Everything from bullying to cheating gets addressed, as does sexual identity, alcohol abuse and depression.  In lesser hands, this may have seemed like overkill, but the Roecker’s clearly know the issues of interest to their core readers and allow each subject to shine, without overpowering the central story.

In the end, a story told from differing viewpoints becomes a tale of friends pulling together to reach a common goal.  This is W. A. R. shows that the legacy we leave behind is just as important as the work we do while we are here.  And that the connections we make are more important than the influence we brandish.