Followers of this blog and my twitter feed (@BOLOBooks) likely know that I am a huge fan of George R. R. Martin and Diana Gabaldon.  While I do not cover their books here on the blog, since they do not fit its focus of crime fiction, I still buy and read everything they release.  So when I heard there was a new anthology (edited by George R. R. Martin and Gardner Dozois) called Dangerous Women, I quickly added it to my holiday wish-list.  The topic of the book came up in my interview with Megan Abbott, so I was looking forward to covering her story here and after receiving the book, I saw that Lawrence Block has also contributed a short work.  Today, I feature mini-reviews of both of these short stories for your enjoyment. 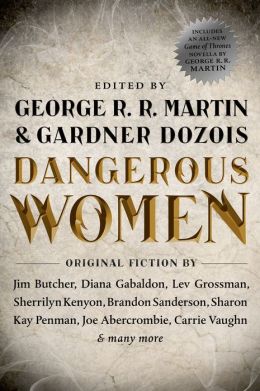 I Know How to Pick ‘Em by Lawrence Block

Last week, in my review of Lawrence Block’s new Bernie Rhodenbarr mystery – The Burglar Who Counted the Spoons – I made sure to praise Block for his ability to effectively write across various styles and tones.  His newest short story, I Know How to Pick ‘Em, is a perfect example of this skill to match words and tone to be betterment of both.

Gone is the light-hearted and comic tone of the Bernie book, and in its place, readers are given a narrator who is dark, brooding and haunted by his past.  Gary (the name he gives out, but who knows if he is being honest about it) is the type of guy who has a litany of infractions, both legal and social, but also a man who has limited experience with real relationships of any sort.

This character, and the plot into which Lawrence Block drops him, combine to throw a sucker punch to the solar plexus of the reader.

To briefly describe the story in a spoiler-free way, it is best to say that it is the story of man who sees a woman in a bar and begins a one-night-stand that hardly goes as he had envisioned it would – or did it?  Whereas Bernie Rhodenbarr likes to close the door on his private romantic moments, Gary and his latest femme fatale have no problem inviting the reader to join them at their most intimate.

I should say here that I Know How to Pick ‘Em contains some frank discussion of touchy and taboo topics, so readers who may have some problems with certain sexual acts should proceed with caution.  To reveal any more about the true nature of these acts would spoil the element of surprise for the reader, but I do feel like a warning is necessary for those readers who are not as well-versed in the Noir side of the genre.

For those willing to go for the wild ride, Lawrence Block’s I Know How to Pick ‘Em is an 18-page short story so well developed that is packs a similar type punch to what one would expect from a longer work.

My Heart is Either Broken by Megan Abbott

Megan Abbott has built a career writing about dangerous women, so it is no surprise to see her included as a contributor to this new anthology.  Just take a look at my review of Bury You Deep to see what I mean.  And still, Megan Abbott’s story, My Heart is Either Broken, manages to break new ground for this talented author.

Readers familiar with Abbott’s work will be immediately surprised to see that this short story is written from a male point of view.  As far as I know, this is the only work in which Abbott has done this, however since I have not read everything she has written, I will at least say it is an unusual choice for her; and even more so for an anthology titled Dangerous Women.

The main thrust of the story involves Tom Ferguson and his wife Lorie.  The story begins in medias res (in the middle of the action) during a situation weeks after Lorie has accidentally “lost” their baby daughter, Shelby.  While at a coffee shop, Lorie left her daughter with a woman she has seen in the shop many times to use the restroom to clean up a coffee spill.  Upon returning, both were missing.  Or at least this is Lorie’s story and she is sticking to it.

As is Megan Abbott’s inclination, the story will call to the reader’s mind actual events that have happened in the news in recent years.  Never being one to take the easy road out, Abbott’s story takes some twists and turns that keep it interesting and distance it from these real life cases that act as an influence.

What begins as a story of a missing child soon becomes a reflection on past events as seen via a new vantage point.  Can we ever really know another person?  My Heart is Either Broken by Megan Abbott is a powerful story which asks difficult questions, even knowing that there are no easy answers.