Cover Reveal – Dead But Not Forgotten

Back in October of 2013, I helped to announce the upcoming release of a collection of new “Sookie Stackhouse” stories from Audible (edited by Charlaine Harris & Toni L. P. Kelner). Today, I am happy to show you the cover for the collection, which will be released on May 13, 2104. 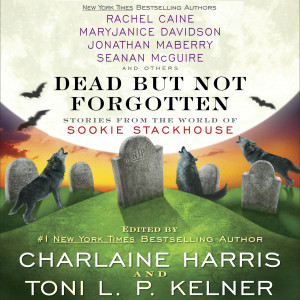 AUDIBLE TO RELEASE ORIGINAL COLLECTION OF “SOOKIE STACKHOUSE” STORIES, DEAD BUT NOT FORGOTTEN

NEWARK, N.J. – March 4, 2014 – Audible, Inc., the world’s largest seller and producer of downloadable audiobooks and other spoken-word content, today announced the forthcoming release of Dead But Not Forgotten: Stories from the World of Sookie Stackhouse. An audio-original anthology edited by Sookie creator Charlaine Harris along with Toni L. P. Kelner, the collection includes 15 new stories featuring Eric, Pam, Quinn and other characters familiar to fans of Harris’s best-selling novels and True Blood, the HBO series they inspired. Audible will release Dead but Not Forgotten on May 13, 2014; the audiobook is available for pre-order now at www.audible.com/DBNF.

“I’d seen the Sookie Stackhouse novels adapted by others for True Blood, but that was an entirely different medium,” said Harris. “It felt a little like leaping without a net when I embarked on Dead But Not Forgotten, even with getting to hand-pick the contributors and my co-editor Toni L. P. Kelner.  But the results have been astonishing, a rich variety of characters and approaches that I can’t wait to share with my readers and listeners.”

“Like all Sookie fans, we can’t get enough of the rich world Charlaine has created,” said Audible’s executive producer for the project, Steve Feldberg. “If Dead but Not Forgotten proves anything it’s that while Sookie’s story may have ended, there are still so many corners to explore and a wealth of memorable characters with their own tales to tell.”

Charlaine Harris first introduced Sookie Stackhouse with the publication in 2001 of the Anthony Award-winning Dead Until Dark. By the time the 13th and final novel, Dead Ever After, was published in 2013, the series had become a mainstay of national best-seller lists, and inspired the hit HBO series True Blood. The Sookie Stackhouse novels have sold more than 29 million copies and have been published in 35 languages.

Dead but Not Forgotten is produced by Audible Studios, the production arm of Audible.com. Audible invented and commercialized the first digital audio player in 1997, and has since been at the forefront of the explosively growing audiobook download segment. In 2013, Audible members downloaded an average of more than 17 books over the course of a year.

Audible, Inc., an Amazon.com, Inc. subsidiary (NASDAQ:AMZN), is the leading provider of premium digital spoken audio information and entertainment on the Internet, offering customers a new way to enhance and enrich their lives every day. Audible’s mission is to establish literate listening as a core tool for anyone seeking to be more productive, better informed, or more thoughtfully entertained. Audible content includes more than 150,000 audio programs from leading audiobook publishers, broadcasters, entertainers, magazine and newspaper publishers, and business information providers. Audible is also the preeminent provider of spoken-word audio products for Apple’s iTunes® Store.