Turning sweet, innocent Dorothy Gale into a megalomaniacal “mean girl” bitch might seem like a risky proposition for any author (let alone a debut author), but that is exactly what Danielle Paige has done in her first young adult novel, Dorothy Must Die.   As the saying goes, however, with great risk comes great reward.  Paige succeeds in taking readers back to Oz, in a completely unexpected and innovative manner.

Dorothy Must Die is actually the story of Amy Gumm – another young girl from Kansas who longs to escape the dull, boring heartland in favor of a more exotic locale.  Yet, even she never expected to end up in Oz.  After Amy is suspended for being bullied at school, she is left alone by her less-than-responsible mother, at which time she gets caught up in a tornado that delivers her directly to Oz.

The Oz that she finds, however, is devoid of magic because of the tyrannical behavior of Dorothy and Glinda.  As the person in charge, Dorothy has passed the Happiness Decree, which requires that all citizens present a happy face, even if it means creating chemically induced grins via PermaSmile.  Amy Gumm is astute enough to immediately ascertain that something is very wrong in this wonderland. 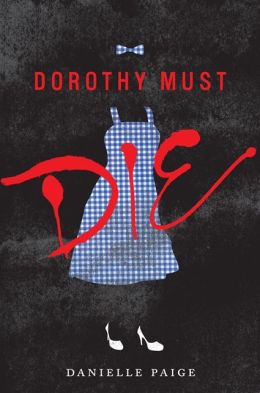 Dorothy Must Die by Danielle Paige

When she and her pet rat, Star, begin their journey to the Emerald City, readers will feel a sense of nostalgia.  Along the way, she meets some new friends – such as Indigo (the Goth Munchkin) and Ollie (the wing-less flying monkey) – who will assist her on her trek.  She even meets a strikingly handsome and mysterious boy named Pete.

All of these folks serve a purpose for her, but only when she meets the members of The Revolutionary Order of the Wicked does she begin to understand the real reason she is here in Oz.  In order to save Oz, she must work with the Order to outwit Dorothy’s minions and ultimately kill Dorothy.

This inventive set-up allows Danielle Paige to explore the world created by L. Frank Baum and shed new light on the battle between good and evil.  As with Gregory Maguire’s now classic re-telling of the tale, Paige convinces us that being Wicked is always a matter of perspective.

Since Danielle Paige once worked as a writer for the daytime soap opera, Guiding Light, it will come as no surprise that she nails the romantic interactions between Amy and Nox.  They follow a traditional pattern of relationship coupling which starts as mutual disdain and slowly blossoms into grudging affection and maybe more.  But this is not the only interaction that Paige successfully illuminates.  Each of the members of The Order of the Wicked teaches Amy an important lesson, and without them all, there is no way she can complete her mission.

Let us not forget Dorothy herself.  It is not easy to turn readers against such a beloved character, but Danielle Paige presents the gingham-clad heroine as truly self-absorbed and anti-social.  And giving her sidekicks from the original tale alarming new jobs within the Emerald City only further enhances how greatly things have changed.  Readers will quickly find themselves rooting for Amy in her quest against Dorothy.

Dorothy Must Die is simply the first in a trilogy of young adult novels by Danielle Paige, so readers with any interest in what is currently happening “over the rainbow,” should jump on board now – it’s going to be one wild and wicked journey.

In case you missed it on Wednesday, be sure to check out the BOLO Books review of the prequel novella, No Place Like Oz.