Made For You –
The BOLO Books Review

Near the beginning of Melissa Marr’s new novel, Made For You, Eva Tilling wakes up after being the victim in a pedestrian-involved hit-and-run accident only to find that she suddenly has a new ability – an ability which is much more of a curse than it is a gift. Because now, when people touch Eva, she can see how they will die in vivid detail, as though she herself were living in that person’s body and witnessing events through their eyes.

Melissa Marr first made a name for herself writing in the young adult market. She started with paranormal fantasies featuring fairies and later transitioned into more contemporary works which still contained various paranormal elements. Made For You definitely continues that trend and while the main characters in this new novel are teenagers, the plot will appeal to a wider audience. 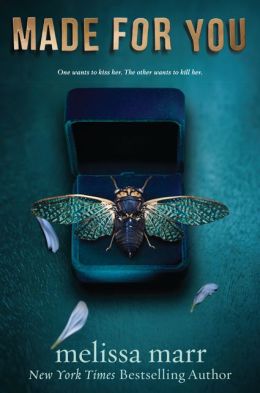 Made For You by Melissa Marr

Made For You is a story about obsession. Eva Tilling comes to learn that the hit-and-run accident may not have been accidental at all. Someone was trying to kill her – and possibly still is. With the help of Nate, a boy she once had a crush on who now seems unusually interested in her, she sets out to use her new-found ability to discover the answers she seeks.

When high-school friends of Eva start turning up dead, it is clear that the killer is inching closer and closer to the inner circle. Desperate to save those closest to her, Eva and Nate begin to take larger and larger risks in their efforts to unmask the culprit.

Told from three points-of-view: Eva’s, her best friend Grace’s, and the killer himself, Melissa Marr keeps reader’s guessing, while also feeding them tidbits of information that Eva herself does not know. Since the killer chooses to refer to himself as The Judge, his true identity can remain hidden, even as he constructs his plans before the reader’s eyes.

Intertwined within this tale of love and murder are serious issues for teenagers today.  Eva’s accident has forever scarred her – both emotionally and physically. But for a teenaged girl, the loss of beauty is proving to be a larger blow than the internal scars.  School cliques, bullying and peer pressure are also addressed in non-preachy ways, without ever sacrificing the core plotline.

Melissa Marr has succeeded in writing a fast-paced novel that will hold reader’s attention until the final reveal. Made For You is yet another new direction for Marr and should please fans both old and new.