Blessed Are The Dead –
The BOLO Books Review

There are countless examples of fictional journalists who end up deeply embroiled in crime solving within the crime fiction genre. One may immediately think of Laura Lippman’s Tess Monaghan or Lindsay Gordon from Val McDermid’s first excellent series. More recently, we have seen Gus Carpenter from Bryan Gruely’s Starvation Lake series and Rebecca Cantrell’s Hannah Vogel. It is time to add another name to that ever-growing list – newspaper reporter, Gabriella Giovanni. Gabriella is the heroine in a new series created by Kristi Belcamino. Gabriella’s first appearance is in Blessed are the Dead and it is one that readers won’t soon forget.

Gabriella Giovanni lives and works in the San Francisco Bay Area. Like many contemporary journalists, she is constantly struggling to be the first reporter on the scene.  Doing so can only help to make her career more secure, especially now that a certain younger reporter is using nepotism to gain a foot-hold on her beat. So, when Gabriella first hears about the disappearance of Jasmine Baker, her instincts tell her that there is more to this story than a standard missing child case. 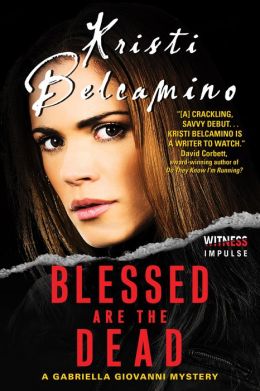 Blessed are the Dead
by Kristi Belcamino

Gabriella’s desire to find Jasmine is as much influenced by her need to prove her worth at the newspaper as it is by a tragic secret from her own past. When Gabriella was a child, her younger sister Caterina was kidnapped and killed. This unsolved case still haunts Gabriella every day. When Jack Dean Johnson is arrested and accused of Jasmine’s abduction, these two cases suddenly seem more connected than anyone, including Gabriella, could have ever believed.

Fans of serial killer novels will see echoes of the classic Silence of the Lambs as they watch the interaction between Gabriella Giovanni and Jack Dean Johnson. Even though Gabriella feels like she is in control of their conversations, astute readers will suspect that Johnson is manipulating the situation to his own benefit. The dynamic between these two polar opposites fuels the narrative flow of Blessed are the Dead. There is no doubt that a violent confrontation between Gabriella and Jack is the only way resolution can be found.

Meanwhile, Gabriella’s love life is also in flux. She is attracted to detective Sean Donovan, but as so often happens in these novels, their conflicting career paths make it even more difficult to grow a relationship. Still, readers will find much to enjoy about both these characters and witnessing their efforts at communication is truly delightful.

In the end, however, the success of Blessed are the Dead rests squarely on Gabriella’s shoulders. Kristi Belcamino has created a complex heroine with strong ties to her Italian heritage. Gabriella has a good heart, but also features enough realistic flaws to encourage readers to return to the series again and again. Fans of series fiction will want to know more about Gabriella and the rest of the Giovanni family and will happily read Kristi Belcamino’s future novels in order to do so.

Unfortunately, the cover design for Blessed are the Dead does not match the quality of the writing held within and I fear that this will keep readers for giving the series a chance.  Hopefully reviews like this one will encourage readers to sample Belcamino’s writing – because once they do, they will be fans for life.