Believe it or not, I can’t read every book that I would like to. There just are not enough hours in the day. Because of that, sometimes I invite folks here to talk about their most recent efforts as another way to keep people informed. Today, Jeri Westerson has stopped by to tell us all about a new anthology she is a part of.  Please join me welcoming Jeri!

When I was asked sometime last year about writing a short story to be included in the serial anthology DAY OF THE DESTROYERS: Jimmie Flint, Agent X-11 Must Save America, I was pretty pumped. Even though as a medieval mystery writer it was out of my time period, it was still set in one of my favorite old movie time periods, so I was familiar enough with the slang, the clothes, the general feel for the era. I’m also a fan of comics and graphic novels, with a hero too good to be true fighting bad guys who are truly irredeemably bad. And the idea that these individual stories written by different pulp authors would, like a movie house serial, continue the overarching story with each entry until the exciting conclusion was too good to pass up. 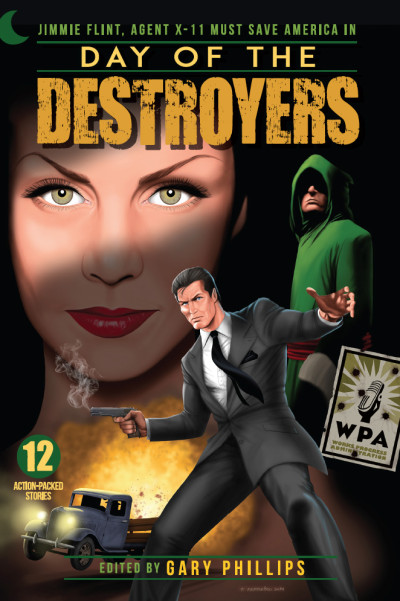 Day of the Destroyers (Hardcover, Paperback)

And it’s just like it sounds. Before there was Bond, there was Jimmie Flint with all the gadgets and goo-gahs of a man on a mission. Inspired by actual events from the 1930s, alluded to in the recent Ken Burns documentary Roosevelts: An Intimate History, a group of extremist politicians and moneyed interests seek to “take back” the country from President Roosevelt. Sound familiar? History can’t help repeating itself.

Agent X-11 journeys across the country preventing an aerial assault on Chicago’s rail lines, destroying a secret factory of gas meant to enthrall millions in New Mexico, racing to stop a machine of fantastic destruction in Manhattan. He’s aided by his girlfriend, intrepid newspaper reporter Kara Eastland, his teenaged protégé Tim Fallon, as well as pulp era masked vigilantes the Green Lama, the Phantom Detective, and the Black Bat. Joining the fight are real historical figures including General Smedley (the original Devil Dog) Butler, and war correspondent Martha Gellhorn. Each action-packed chapter/story in the anthology builds to a final showdown between X-11 and his arch-nemesis, Colonel Lucian Starliss, head of the Medusa Council. Yes, it’s very like a page out of a Captain America comic, except the only super power Jimmie has is his wits.

Though the majority of the other stories are in Jimmie’s point of view, I wanted to throw in my own spin. So I plucked real life reporter and Hemingway lover Martha Gellhorn from the pages of history, and put her right in the thick of it, thrown in with Jimmie and his reporter girlfriend in a scheme set in the deserts of New Mexico, called “Mesmer Maneuver.”

Harking back to a bygone era, action-packed, and with just good old-fashioned good versus evil, what more could you want?

I’d like to thank Jeri Westerson for stopping by BOLO Books to tell us about this new anthology. It sounds like it will be a fun read and I hope that some of you will check it out and let us know what you think.