There has been tremendous buzz in the crime fiction community over Bryon Quertermous’ debut novel, Murder Boy – and rightfully so. Quertermous has created a work which exists simultaneously as both a classic example of the noir thriller and as a unique dark comedic attack against the hypocrisy of academia. This would be no easy feat for a veteran author, but still Bryon Quertermous manages to makes it seem like a leisurely stroll down a dimly lit corridor. 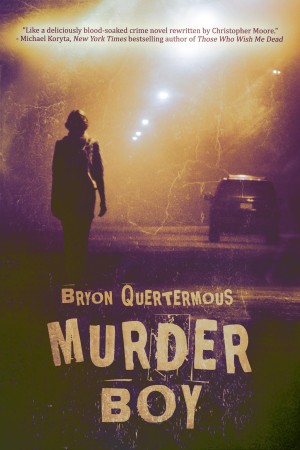 Murder Boy tells the tale of Dominick Prince as he struggles to obtain his advisor’s approval of his thesis. Passing this class will allow Dominick to avoid a life of crime on the streets of Detroit, but the snooty Professor Parker Farmington refuses to hear his pleas. Joining with a rag-tag team of co-conspirators, Dominick decides that he will kidnap Professor Farmington and force him to sign off on his thesis work.

However, while the kidnap plan orchestrated by Dominick seems like a Coen brothers’ script in the theoretical, in reality it ultimately unfolds more like a series of misadventures involving Wile E. Coyote.

This sums up the basic plot of Murder Boy, but the magic of the novel comes in the execution. Bryon Quertermous wisely refuses to take himself or his novel too seriously and yet, it is that same light-hearted, dark comedy which allows the book to deliver a sucker punch to the reader. At a time when it seems that many authors want to over-write for their premise, Quertermous keeps his novel tight and action-packed. There is hardly a spare word throughout. Clocking in at roughly two hundred and fifty pages, the reading of Murder Boy flies by, so much so, that at the end, readers will just want to go back to the beginning and start again.

Midway through Murder Boy, Bryon Quertermous describes life as “a random series of events triggered by even more random minutiae.” Having read rhe novel, I can tell you there is nothing random about Quertermous’s writing talent. This is just the first in what is sure to be a long line of unexpected and inimitable novels from the mind of a madman with the heart of hero.