Ann Cleeves’ first Shetland Quartet is about as perfect a mini-series as readers are going to be able to find. In the first book, Raven Black, readers are introduced to Jimmy Perez and by the end of final book, Blue Lightning, our empathy for Jimmy has been pushed to unexpected new heights. But it is more than just the characters that keep readings coming back to these novels. The Shetland Islands themselves are alive in these books. Readers who enjoy books that are deeply rooted in their sense of place should read Ann Cleeves immediately. Next week, Thin Air – the second book in a whole new Shetland Quartet – will be released here in the US.

Thin Air once again finds Jimmy Perez at the center of a criminal investigation. Many of the others in his new team – who were introduced in Dead Water – return as well. But as with any series novel, the reader also has to connect with a whole new set of secondary characters. Cleeves excels at creating fully formed individuals who are easily distinguishable from each other. These folks will form the core suspects in the case at hand. 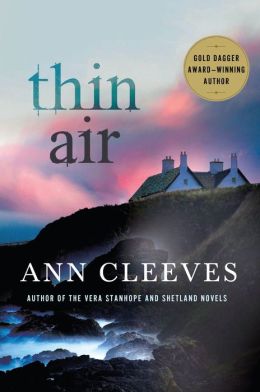 In Thin Air, the readers focus falls to a group of Londoners who have traveled to the Shetland Islands to celebrate the wedding of mutual friend. This tight group became friends during their university days and that history plays into what happens in Unst. Unst is the northern most island in the Shetlands and Thin Air allows Cleeves to once again display the diversity which exists throughout these unique islands.

The case at the center of the novel is the disappearance of Eleanor, one member of this English party. Since Eleanor was having some emotional problems after a recent miscarriage, it is first assumed that she vanished of her own free will. However, once her body is found near the cliff’s edge, it becomes obvious that this was a homicide. Ann Cleeves limits the suspect pool – focusing on the core group of friends – which helps to ratchet up the tension. Digging into their history, Jimmy Perez and Willow Reeves begin to find inconsistencies in their stories. Could one of them have killed their friend?

Intermingled with this crime is a Shetland legend: Peerie Lizzie is a child who died under mysterious circumstances and many Shetlanders believe that her ghost haunts Unst. Even Eleanor, who was working on a documentary about the legend, believed that she had seen the ghost in the days before her own disappearance and death. Against common sense, this angle of the investigation must also be examined by the police team. Readers interested in folklore and myth will find the details about this legend especially fascinating.

All in all, Thin Air is yet another successful Ann Cleeves novel set in the Shetland Islands. We, as humans, are all products of our past and the characters Cleeves has created demonstrate this on multiple levels. Is this a case of history extracting revenge or does the fault lie in everyday human emotion?