Jessica Knoll’s Luckiest Girl Alive is a novel about reinvention. This debut work represents the arrival of a talented new author to the crime fiction community. Perfect for fans of Gone Girl and The Girl on the Train, Luckiest Girl Alive is sure to be the topic of conversation at both swanky cocktail parties and summer barbeques this season.

The longing to better ourselves is a universal human desire. For most of us that involves a fairly steady path to enrichment: get an education, so you can get a better job, which will have a higher salary, allowing for a comfortable living and the ability to purchase one’s needs and wants. Ani FaNelli takes a different path.

Luckiest Girl Alive is the story of Ani FaNelli, a fashionista on the verge of marrying into one of the most celebrated families in New York City. Ani has a high-profile job and socialite friends, but just under the surface still resides the shy girl who was once criticized by her family and teased by her classmates. Luckiest Girl Alive is the story of how Ani rose from the ashes and claimed her right to the glamorous life.

Told in alternating chapters –past and present – Jessica Knoll has structured the novel to obfuscate many of the details of Ani social climb as long as possible. Not only does this successfully build suspense for the reader, but it also allows Knoll to con readers into thinking the story is headed in one direction only to twist the tale mid-way through with a shocking revelation. 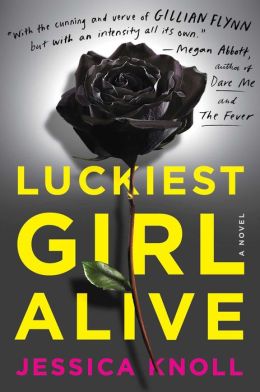 Wanting to remain spoiler-free, I will only say that Ani’s life is filled with some traumatic events which are extremely topical and ripped from today’s headlines. How readers relate to Ani will depend on their viewpoints regarding Ani’s actions throughout the novel. There is no doubt that Ani is not an easy person to like or even understand at times; and yet, Jessica Knoll has managed to make Ani very relatable and possibly even endearing to some.

Reinvention is the core theme throughout Luckiest Girl Alive. For example, from the moment TifAni FaNelli – her birth name – enters the halls of The Bradley School, she realizes that since no one knows her, she can be anything she wants. By making new friends, dressing differently, and rebelling, she manifests a persona which matches the ideal in her head. Later in life, she will rise to prominence as a magazine editor crafting self-help articles and essays “teaching” women how to “better” themselves.

Ultimately, Ani is so successful at reinventing herself that she sometimes fools herself. Unfortunately, those moments are fleeting and as she approaches her wedding to Luke Harrison she begins to realize that the façade is beginning to shatter. A major reason for this is Ani’s involvement in a documentary project which will recount the traumatic events she has struggled to keep hidden. Ani must balance the desire to expose the truth with the ramifications such a revelation will cause in her current life.

Luckiest Girl Alive is a fast-paced read and despite some of the heavier topics within, it reads like the perfect beach book. Jessica Knoll comes to this debut novel from the magazine world – having worked at both Cosmopolitan and Self – so she knows how to tread the line between serious and fluff without alienating readers who prefer one over the other. Because of that, Luckiest Girl Alive is sure to find its way onto many summer vacation reading lists.