If you read my recap post about the Malice Domestic convention yesterday, you no doubt noticed that I was a huge fan of the panel about Agatha Christie and the Golden Age of Mystery. Today, one of the speakers from that panel, Martin Edwards, joins us to discuss his latest book – a massive scholarly non-fiction work looking at the Golden Age and the history of the Detection Club. Please help me welcome Martin Edwards to BOLO Books.

BOLO Books: You are considered one of the leading authorities on the Golden Age of mysteries. What is it about that time-period that first piqued your interest?

Martin Edwards: I first encountered Agatha Christie’s work just before my ninth birthday – the full story is told in the introduction to The Golden Age of Murder. It was some time before I realised that most of her best work was written decades earlier, in the Twenties and Thirties.

BOLO Books: As I understand it, the Golden Age is generally dated to “between the wars.” What was it about that time that made it so ripe for the genre to flourish?

Martin Edwards: In part, the Golden Age was a reaction to the horrors of the First World War. People sought escapism in game-playing, solving crossword puzzles – and reading detective novels. Previously, many of the best detective stories (Poe, Conan Doyle, Chesterton and so on) had been short stories. But the length of a novel allowed authors to play more complicated games with their readers, and challenge them to figure out whodunit.

BOLO Books: Are there major differences between the Golden Age of mysteries in the United Kingdom and that same period in the United States?

Martin Edwards: There are many similarities between British Golden Age fiction and the work of writers such as Ellery Queen, S.S. Van Dine, Q. Patrick, C. Daly King and so on. The pulp magazines in America did not have a direct equivalent in the UK, and in the UK, the detective story predominated, whereas in the US, a wider variety of crime stories enjoyed popularity. In the US, however, there were (as far as I know) few equivalents during the Thirties to the ironic school of British crime writers who focused on the psychology of criminals – Francis Iles, Bruce Hamilton, and so on – until after the Second World War when those great writers Highsmith and Millar came along. 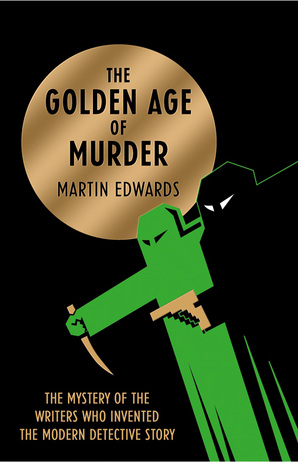 The Golden Age of Murder

BOLO Books: Tell us a little about the Detection Club.

Martin Edwards: The Club was formed in 1930 by Anthony Berkeley, one of the most interesting of all Golden Age writers. It was a private dining club with a limited membership, and members were elected by secret ballot. The aim was to socialise, and to try to elevate the literary standards of the detective story. The Club continues to thrive to this day, and there are three dinners a year – two at the Garrick Club, and one at the Dorchester Hotel. There are about seventy members, including such luminaries as Ruth Rendell, John Le Carre and Len Deighton, and the current President is Simon Brett. I was inducted in 2008, on the same occasion as my good friend Ann Cleeves. It’s a convivial organisation, and one of which I’m very proud to be a member.

BOLO Books: The Detection Club allowed Feminists, GLBT authors and those with differing political views to express themselves in a way that they would not have otherwise been able to. How was this possible?

Martin Edwards: Well, I don’t think that in the Thirties people talked openly about these things. Some of the members may well have been, at least on the surface, somewhat prejudiced by modern standards. But I tend to think that people with an apparently conservative outlook are often more broad-minded than others believe, or than they realise themselves. People like Dorothy L. Sayers, who was a natural conservative, did not necessarily “approve” of gay and lesbian colleagues, but in practice she got on well with them. The same was true of Anthony Berkeley, and (I would speculate) Agatha Christie.

BOLO Books: If you had to attribute one trait of the genre today to the existence of the Detection Club, what trait would you consider their most important legacy?

Martin Edwards: A belief that detective fiction can be entertaining, but also something more – literature of real and lasting quality.

BOLO Books: It has been said that the mystery novel is the social novel of today. In many ways, this is something that started back in the Golden Age and is vitally important to the genre today. Would you agree that even the coziest of crime novels have their roots in an exploration of societies’ ills?

Martin Edwards: There is some very light ‘cozy’ fiction that makes little or no attempt to explore character or society, and stands or falls on its own merits. But I do think that the ‘social comment’ aspect of crime fiction is often under-estimated. The best books, in my opinion, place entertaining the reader as the first priority, but also do something more. There are plenty of examples – I’d cite Reginald Hill’s books as one of them.

BOLO Books: Although the list is likely massive, what authors working today would you consider to be most closely following the guidelines set forth by the Detection Club?

Martin Edwards: If you mean the ‘Detective’s Decalogue’, the jokey ‘rules’ laid down by Ronald Knox, then I don’t think they have ever been taken seriously. If you’re thinking of the focus on entertainment coupled with literary merit, plenty of names spring to mind. One writer I’d like to single out is Peter Lovesey, a long-time member of the Detection Club, and one of the finest crime writers of the last fifty years. As you say, there are others, but Peter is undeniably a class act.

BOLO Books: At this year’s Malice Domestic convention, you have the task of interviewing the International Guest of Honor, Ann Cleeves. How are you preparing for that interview? What makes Ann’s books unique?

Martin Edwards: Ann and I have been good friends for about twenty-five years, so I’m hoping not to need too much preparation! I admired her, and her books, long before she became well-known. Her books display very clearly a humanity that cannot be faked – Ann is a wise and compassionate person, and that shines through in her writing.

BOLO Books: If forced to choose only one format for all your future reading, which would you choose: Hardback, trade paperback, mass-market paperback, or e-book?  And why?

I would like to thank Martin Edwards for stopping by BOLO Books today and I encourage you all to seek out a copy of The Golden Age of Murder, as well as Martin’s own mystery novels. You will be well rewarded.