Second novels are difficult to write; second novels within a series are even tougher. With Burnt River, Karin Salvalaggio makes it look easy. Salvalaggio burst on the scene last year with her debut thriller, Bone Dust White, and now she brings Macy Greeley back in a story that is even stronger and more complex than the first. It is rare for a new character to so quickly acquire the devotion of a finicky reading public, but Salvalaggio has done it – Macy Greeley is going to be with us for a very long time.

Burnt River is set during a dry, hot summer in the Flathead Valley of Montana. As the novel opens, a wildfire is raging and a lone woman is struggling to survive amongst the chaos. Who that woman is and how she found herself in this peril won’t be revealed until well into the book, but the plot getting readers to that point takes more twists and turns than is typically found in an entire series of books. 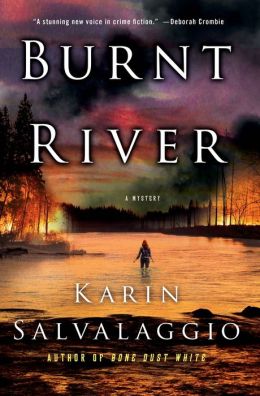 It immediately becomes clear that the main focus of the plot will center on a group of young soldiers at home on leave from the Afghanistan War. The tight-knit relationship between these friends is put to the test when one of them is found dead in an alley outside a local bar. Along with the victim’s twin sister, the remaining friends must deal with questions from the police while also stressing over a secret from their past: Due to the drought conditions around Montana, a car they hid in Darby Lake sometime earlier could potentially re-surface, along with a transgression they thought was buried forever.

Detective Macy Greeley is called in to help with the high-profile investigation of the dead soldier, but it is this older secret which might prove the most dangerous. Working with local Police Chief Aiden Marsh, Macy begins the task of interviewing relatives, witnesses, and suspects in the hopes of figuring out what happened to this man who dedicated his life to protecting our freedom.

In addition to juggling the demands of this difficult case, Macy is also still dealing with her complex relationship with Ray Davidson, the married (to someone else) father of her young son. Actions taken during the course of the case only serve to further strain the tenuous relationship. Karin Salvalaggio tackles this head-on and does not shy away from the honest impact this situation would have on both the professional and personal dynamics of their partnership.

Among the various topics that are woven into this thought-provoking novel are dementia, drug use, rape, militia groups, stalking, and mental health issues. What is so rewarding is that Karin Salvalaggio packs all of this in without any of it seeming contrived. These are well-defined characters who are living authentic labyrinthine lives and thus, readers are going to find their allegiances shifting throughout.

Burnt River is a book readers will consume quickly. Salvalaggio keeps the plot moving with a winning mixture of character-defining episodes interspersed with high-action sequences and unexpected surprises. Even once the culprit is identified, Karin Salvalaggio stuns with a last-minute revelation that will have fans clamoring harder for the next book in this series.

(Since this review is based on the audiobook version of Burnt River, one would be remiss in not praising narrator, Erin Moon, who does an exceptional job of bringing to life this varied cast of characters.)

Disclaimer:  An audiobook version of this title was provided to BOLO Books by the publisher. No review was promised and the above is an unbiased review of the novel.