Chapter Four of The Black Hood: “The Bullet’s Kiss” has just been released. With only five chapters in this first story arc, things are not getting any easier for Greg Hettinger. His only chance at redemption is to uncover the identity of the head honcho behind “The Connection.”

In an effort to do this, Greg begins this chapter by tracking down two top henchman involved in the crime syndicate. Duane Swierczynski and Michael Gaydos give readers an epic battle in a Philadelphia graveyard. Unfortunately for Greg, the black hood itself does not allow for the best sightlines in a multi-opponent fight. 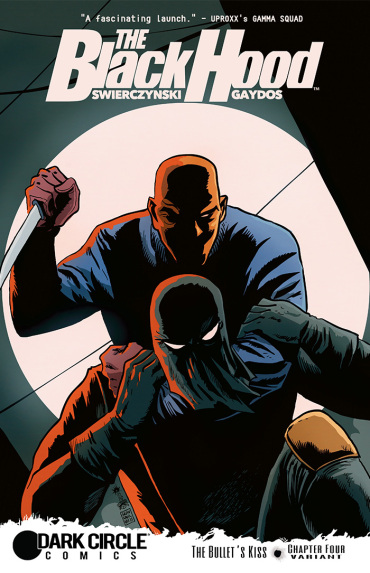 Making matters worse, before he can deal with these hoodlums, they manage to rip off his hood and uncover his true identity. Shortly thereafter, the police arrive and the shit really hits the fan.

Now, with only six hours to expose the true criminals, Greg is going to have to turn to the few friends he has left. But can a man who is down-and-out truly count on anyone?

The Black Hood continues to impress and with just one more issue left in this first storyline arc, readers are really going to want to catch up. The final issue promises to be a bloody battle to the finish, so both comic and crime fiction fans are sure to be satisfied with this ground-breaking achievement from Dark Circle Comics.