Reading books about the abduction and murder of children is never easy, but in her new book, First One Missing, Tammy Cohen presents one of the most harrowing reads of the year. What is truly remarkable is that she does it without the graphic violence so prevalent in other serial killer novels. Most of what elicits the creepy feelings comes from the reader’s own imagination as Cohen outlines a horrific chain of events.

First One Missing is really about the families left behind after the death of their loved ones at the hands of a serial kidnapper and murderer. In this case, the four families affected by the Kenwood Killer regularly gather together for support meetings at the home of one of the victims. Here they are often joined by their assigned FLOs (Family Liaison Officers). Each family member gets something different from these meetings – both good and bad. Until the killer is caught, they want to keep the memory of their children at the forefront of the public and police’s mind, but that unfortunately also means reliving the tragedy over and over at each gathering and with each new victim. 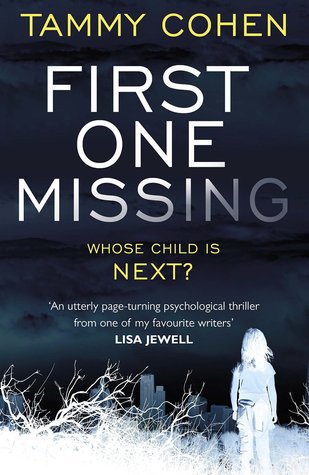 First One Missing by Tammy Cohen

Tammy Cohen has no shortage of characters to juggle throughout this novel. In addition to the families – including spouses, step-parents, and other children – and the four FLOs, there is also a journalist of questionable ethics and a man who is just beginning a new relationship via an online-dating service. The shifting focus on these individuals has the potential to get very confusing, but somehow Tammy Cohen keeps things from becoming a tangled mess in reader’s minds.

The main reason for this success is that Cohen manages to give each of these characters a distinct and authentic voice – no easy feat when many of them are experiencing the same emotions and turmoil. Several of these characters are complex enough to carry a story single-handedly, but by giving readers a collection of voices, it allows them to feel just a fraction of the anguish going on in the minds of these folks. Dipping into their psyche not an easy place to be, but it does cause the reader to feel the necessary empathy needed to soldier on through the novel.

Again, I must reiterate that this is not a “light” read. The sense of depression and the cynical view of the population can become very overbearing and readers may find that they have to step away from the book at times just to maintain sanity. But the need to know exactly what is going on will draw readers back to the book like a siren call. And like the song of that mythical creature, there is no option of disobeying, even though one knows it could lead to destruction.

Fortunately, Tammy Cohen brings everything to a satisfying –albeit not completely happy – end. Every time she leads readers to believe that the solution is obvious, Cohen throws in a few more complications which turn the plot on its head. Don’t even get me started on the title. First One Missing is such a simple phrase, but Cohen succeeds in milking every drop of meaning out of that title. Rarely is a title so linked to the meaning and theme of a story.

Read First One Missing because it is an impeccably structured novel with complex characters and a solid plot you won’t soon forget. But know that it will be emotionally draining, as Tammy Cohen is not afraid to expose some of the more disturbing realities of society today.