Not only is A Curious Beginning the title of the new novel from Deanna Raybourn, but it is also an apt description of this series debut itself. “Curious” not in the way that it is strange or odd – although there are certainly portions that fit those labels – but “curious” in terms of being eager to explore and learn; and of course, “beginning” in the sense that it feels very much like the start of a long acquaintance with Veronica Speedwell.
A Curious Beginning finds Deanna Raybourn returning to Victorian London – a time and place she knows intimately after having navigated similar terrain with her Lady Julia Grey mystery series. This new series, however, has a different feel from that earlier series which will probably delight and frustrate readers in equal quantities. Persevere though and readers will find another rewarding experience exploring some other less seen sides of Victorian life with Veronica and her companion, Mr. Stoker (no relation to Bram). 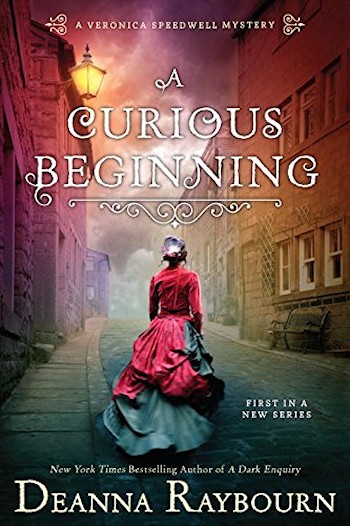 A Curious Beginning by Deanna Raybourn

As with any series, success depends largely on the strength of the main character. In the case of A Curious Beginning, readers could not hope for a better escort than Veronica Speedwell. Like most of Rayborne’s female characters, Veronica rebels against the artificial constraints placed on her gender during this time period. Similarly to Tess of the D’Urbervilles, Veronica connection with nature foreshadows a wild and independent woman who is not afraid to embrace – and even use – her sexuality. As an orphan and lepidopterist (butterfly expert), Veronica would be equally comfortable walking around Walden Pond with Thoreau as she would be on the gritty streets of London with Oliver Twist. Veronica is a decidedly modern heroine without sacrificing the traditional traits that make Victorian era characters so appealing to readers.

As the novel opens, Veronica’s adoptive aunt has just passed away, releasing the bonds tying her to a dull, domestic life. Free to set out on far-flung adventures, Veronica is filled with anticipation. But before she can even pack, her home is ransacked and her life threatened. Saved by Maximilan von Stauffenbach, who convinces her to travel with him acting as her chaperone, Veronica resigns herself to this mysterious escapade. Max promises to explain all, when the time is right. Their journey brings them to the taxidermy workroom of one Revelstoke Templeton-Vane (aka Stoker). Left with this eccentric gentleman, Veronica is perplexed and her discombobulation only intensifies when later Maximilan is found murdered before he can explain why he has this strange affinity her.

Fearing for her safety, Stoker takes Veronica to hide in a traveling circus he once worked for. This goblin market of oddity holds some secrets to Stoker’s past, but does it also hold more danger? By necessity, the stay at the circus is short-lived and they must continue their journey. Ultimately, Veronica and Stoker windup at Bishop’s Folly – a museum like home the likes of which the Brontë sisters might have conjured out of the ether. Here, they decide that their only course of action is to solve Max’s murder for themselves.

As this duo artfully dodges each foe, readers find out more and more about why Veronica is being threatened. While the reason ends up being less original than one might like, the resolution to this conundrum that Deanna Raybourn presents is unexpected and portents more great adventures as the series continues.

Deanna Raybourn writes Victorian tales that feel very much of the period but also avoid any of the Trollopian or Dickensian tropes that sometimes dominate this sub-genre. A Curious Beginning is a promising start to a new series with a main character readers are sure to love. Veronica Speedwell’s developing relationship with Stoker has all the earmarks of a classic pairing. This is historical fiction for those readers who did not know they liked historical fiction.

Disclaimer:  Both a print and e-galley of this title were provided to BOLO Books by the publisher. No review was promised and the above is an unbiased review of the novel.