The title of this post alone is enough to transport me back to Sunday afternoon in Washington, DC. Louise Penny is out on a brief tour for her latest Chief Inspector Armand Gamache novel, The Nature of the Beast, and this year’s tour brought her close enough for me to attend. 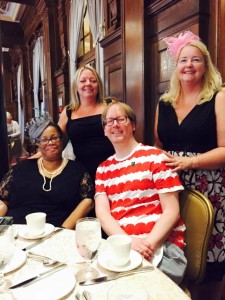 Politics and Prose, one of the best independent bookstores in the country hosted the event, but since this was Louise Penny, they wanted to make it a bit special. So, they set up a High Tea event in one of Washington’s swankiest hotels. Needless to say, the event sold out very quickly but I was fortunate to grab some tickets. When Sunday rolled around my husband Michael, my friends Sharon, Patricia and Dru Ann and I headed into the city. There, we gathered in The Willard’s lobby with many other Malice Domestic regulars – among them: Eleanor, Joni, Shawn, and Robin.

After getting our tickets and books, we entered the seating area and were treated to a delicious – albeit sparse – high tea. Bite-sized sandwiches were paired with either English Breakfast or Green Tea. Vanilla and Chocolate Chip scones and then even tinier desserts in three flavors followed. Though it all, presentation was clearly The Willard’s focus and it showed.

Not long after this, Louise Penny entered to rapturous applause. Taking the podium, Louise delighted the attendees with some interesting and witty anecdotes about the road to the publication of Still Life, the first book in the series. As always, Louise was gracious and entertaining. She then opened things up for questions from the audience. Here are a few things I noticed:

A signing followed this Q&A portion of the event. Politics and Prose very wisely had many of the books pre-signed, so that if people didn’t want to wait, they could still leave with an autographed book. I needed a hug from Louise, so I stuck around to have my copy of the novel personalized. I was also able to get the 10th Anniversary copy of Still Life (which I ordered from The Book Depository) signed for my personal library. All in all, it was a wonderful afternoon spent with one of the greats in the crime fiction community.