Vintage Hollywood and Megan Abbott is like Chocolate with Strawberries – a perfect pairing. Megan has already shown readers that she can write damn fine novels (such as Dare Me, The Fever, and Bury Me Deep) and she has written one of my favorite overlooked short stories, “My Heart is Either Broken.” Now with “The Little Men,” she has contributed to The Mysterious Bookshop’s great series of Bibliomysteries.

“The Little Men” is set in 1950’s Hollywood. It is the story of Penny Smith, a failed actress who is now making a living by doing makeup on the movie lots of yesteryear. Struggling to make ends meet, when Penny finds an affordable bungalow for rent in Canyon Arms, she thinks her prayers have been answered.

Sure, the landlady – Mrs. Stahl – is a bit odd and maybe more that a bit nosy, but beggars can’t be choosers. It’s only when Penny makes friends with the eccentric gay couple next door in Bungalow Number Five that she starts to learn more about the history of her new abode. 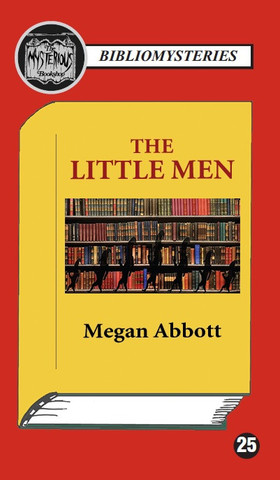 The Little Men by Megan Abbott

It seems that Lawrence, one of the previous tenets committed suicide in her cherished bungalow. Larry was a bookseller who shared his love of literature with Mrs. Stahl. Is it possible there was more to that relationship? An inscription in one of Mrs. Stahl’s treasured books might just hold the answer.

All of this becomes more complicated when Penny finds out that Larry was seeing the exact same visions of tiny little men scurrying across the bungalow floor in the wee hours of the night that she has started to see since moving into Bungalow Number Four. Is Penny following Larry’s path to madness?

Megan Abbott keeps the suspense high in this short story. Readers will run through the gamut of possibilities before what is really happening – and what really happened – is finally revealed. You can always count of Megan Abbott to tell a satisfying story featuring strong female characters and “The Little Men” is just further proof. This one is a fine new addition to the Bibliomysteries line of books.