A Song of Shadows –
The BOLO Books Review

Since the beginning of John Connolly’s series, Charlie Parker has been battling against evil in all its forms, so it should come as no surprise that with this latest entry – the thirteenth – Parker is facing one of the worst evils humanity has ever known – the Nazis. In typical Connolly style, however, this confrontation hardly takes the expected route and focuses more on the lingering effects of decisions made without forethought for their long-term ramifications.

As A Song of Shadows starts, Charlie Parker is still recovering from injuries sustained in his last confrontation with the dark side. His healing process leads Parker to the small town of Boreas, Maine. It is here that he will ultimately uncover the secrets of the townsfolk and more importantly, the mysteries that may lie even closer to home.

If one were to narrow the theme of A Song of Shadows down to one concept, it would probably be that of legacy. Much of the novel resonates with Charlie Parker’s relationship with his daughters. His first child, Jennifer, died long ago but still continues to (literally) haunt his every moment; while Sam, his daughter with Rachel Wolfe continues to struggle to find a contented place in her father’s complicated life. The desire to ensure that the world is a better place for our children is a universal parental doctrine to which Charlie Parker is not immune. Unfortunately, he is constantly reminded of the darkness that threatens humanity’s very existence. 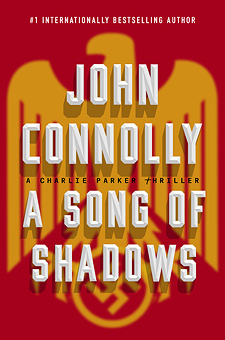 A Song of Shadows by John Connolly

In the town of Boreas, Charlie Parker meets Amanda Winter and her mother, Ruth. This relationship will lead Parker to an unwanted discovery about what lies under the façade of this town’s normalcy. When his speculations begin to prove correct, his investigation will put all that is important to him at risk.

Boreas is a town that is infested with an evil that stretches back to World War II. The hunting of Nazi war criminals is a serious subject matter, but only the latest in a long line of abuses Parker has tackled in this series – everything from race relations and religious zealotry to child abuse and human trafficking.

A Song of Shadows is an important book in the overall story-arc of the Charlie Parker series. All the familiar characters make appearances – most importantly fan favorites Angel and Louis, a pair of gay hitmen who never cease to entertain with their banter and deadly hijinks. There is a major revelation late in the novel which will affect things moving forward in the series, but for obvious reasons, there will be no spoilers here.

The capacity for man to commit horrible atrocities against another is one of the hallmarks of crime fiction, but in John Connolly’s hands this concept becomes more than just words on a page for Charlie Parker to battle against; readers get the sense that John Connolly himself is attempting to rid the world of real evils and make this a better place for everyone.

A Song of Shadows moves us closer to some type of final showdown. Readers looking for true originality and complexity in their crime fiction need look no further than John Connolly’s Charlie Parker series.