It is impossible to put into words what the experience of Bouchercon is like – but that is not going to stop me from trying. Bouchercon is so many things, but first and foremost it is a fan convention. There is no elitism overshadowing the festivities. Everyone is there for the same reason; we just want to celebrate the genre we love. 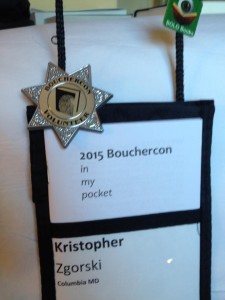 Each Bouchercon has its own flavor and each person attending has a different experience. For me, Bouchercon 2015 in Raleigh was very much a chance to really spend some quality time with those who have supported BOLO Books from its inception three years ago. Meeting face-to-face with people who look forward to the news and reviews I put out there on the Web is always a delight and having so many in one place makes it feel so much like a family reunion. After all, I wouldn’t keep producing content for BOLO Books if there were not readers out there who craved that information.

With that in mind, Bouchercon 2015 was the first year where I did not travel endlessly from panel to panel gaining insight into the minds of my favorite authors. The panels I did attend were almost all universally excellent and I have no doubt that those which I did not attend were equally successful. I would like to say here that Ali Karim and Kerry Hammond did a fantastic job with what can be viewed as a thankless job – panel schedule creation. The entire team behind Bouchercon 2015 Raleigh is to be commended for a wonderful conference. Thank you to Al Abramson, J.D. Allen , Erin Mitchell, Naomi Kappel, Ingrid Willis and the countless other volunteers who worked long and hard to bring this year’s event off without a hitch.

Now for the actual recap:

Often I will travel in to the conference location early to help with the behind-the-scenes prep work needed to pull off this gathering of 1500 or so fans of crime fiction. Unfortunately, this year I was only able to get away from my day job on Wednesday. Given that Raleigh is not terribly far from Baltimore, my husband, Michael and I still managed to get into town at a decent time, get ourselves registered at the hotel and pick up our Bouchercon registration materials. From there, we grabbed a bit to eat and headed out for the Oakwood Cemetery tour organized by Molly Weston. WOW. This turned out to be a great way to start Bouchercon 2015. Not only did I get to meet some folks who I was desperate to meet: Kathy Boone Reel and Sarah RH, but it also gave us all a quick history of Raleigh. Even though our tour guide was in the midst of her own crime story (the cemetery golf cart had been stolen hours earlier), she did not allow this to affect her presentation. I have decided that when I go to a new city, I am going to always go on a local cemetery tour. It was such a great way to learn about the history of the town and its residents.

The turn-out for the pre-con event was very strong and some of us even stopped at Krispy Kreme on the cab ride back to the hotel. Not a bad way to kick things off.

From there, Michael and I made a quick stop at the Marriott Bar. In the center of the bar was a large red couch where I found some of my favorite people in the world. We only stayed for about two hours, but in that time, I saw Alex Marwood, Helen Smith, Greg Herren, Alison Gaylin, Wendy Corsi Staub, Oline Cogdill, Mark Edwards, Elizabeth Little, Marcia Tally, Deborah Crombie, and probably more than a few others I am forgetting. Remember folks, there was drinking involved.

The first official day of the conference started with a tradition – Breakfast with Judy Bobolik, Dru Ann Love, Kristi Belcamino, and Ann from Oz. It was delicious and then all of us rushed off for the Speed Dating Event. This event involved about 10-12 fans at tables while pairings of authors rotate around the tables to pitch there new books and hand out swag. This year’s Speed Dating was vastly better than last year, but this event always seems to have issues. Namely that having that many people in one room at the same time talking at top volume results in a cacophony which is virtually impossible to hear through. That said, I did come away with knowledge of a few new books I needed to look into.

Next was a stop off at the book room. Pro Tip: if there are specific books that you want, get to the bookroom early because some of the hottest titles sell out quickly and you don’t want to miss them. As always, the vendors in the bookroom did a great job of anticipating attendee’s interests and stocked what people want. This was further evidenced by the dwindling of their entire stock as the weekend went on. Mike Bursaw of Mystery Mike’s has the organizing of the bookroom down to a science. 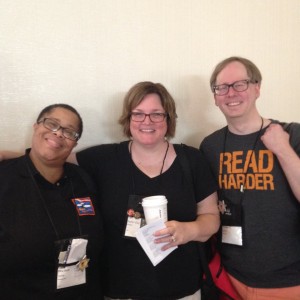 My first panel of Bouchercon Raleigh – and one of the absolute best – was New Faces: the Best First Novel Nominees. I volunteered as the time-keeper for this panel because I knew that there was no way I would miss it. The panelists here wrote some of the best novels of the year and any one of them would have been a worthy winner of this award. Just hearing Kristi Belcamino, M. P. Cooley, Julia Dahl, Allen Eskens and Lori Rader-Day talk about their writerly journeys was worth the whole Con attendance. Lori went on to win the award later in the weekend, but folks, if you have not read all the books by these fine authors, so yourself a favor. It may sound clichéd, but these are the stars of the future.

Despite having several other panels on my planned schedule, I never made it to them because I kept running into folks to hug, chat with, and stalk. At my core, I am a total fan-boy and I hope that followers of BOLO Books know that part of the deal is that should I ever need to be bailed out, I’m counting on you all for help.

I did make it to the Me Against the TBR pile panel moderated by Clair Lamb and featuring Matt Iden, Dana Kaye, Robert Kroese, and L.J. Roberts. This was a fun panel in which the talk was all about books. There really were not answers to be had on how to manage a To-Be-Read pile, but they did succeed in adding new books to the audience’s piles. Interestingly, one of the most talked about books – The Martian – is actually a sci-fi thriller and indeed worth checking out if you have not read it.

Of course Oline Cogdill did a wonderful job of interviewing the two American Guests of Honor: Tom Franklin and Kathy Reichs in the final panel of the day. This end of day interview session was followed by the opening ceremonies. 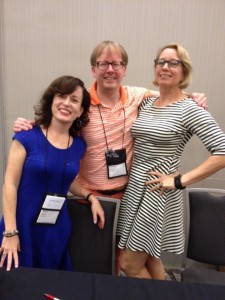 can’t remember who took this photo. Let me know and I will credit you.

After the opening ceremonies, I volunteered to help with the HarperCollins book signing event. Here they had twenty or so of their authors available to sign free books for the attendees. Since I was assisting Alison Gaylin and Laura Lippman, this was hardly a difficult task. I attempted to keep their book stock at hand while they met with their adoring fans. Needless to say, it wasn’t long before all those books were gone.

Dinner at The Pit, a popular Raleigh BBQ joint followed this. It is true that the Bouchercon organizers arranged for a tent outside with sample servings of free BBQ, but we were far too hungry to wait and really needed a full meal. Thursday ended with another visit to the Marriott Red Couch. (I fully expect that couch to turn up in someone’s book one day soon).

I skipped the early breakfast gathering on Friday morning. My moderating job was at a late panel this afternoon, so I wanted to make sure I got some quality sleep in – it sort of worked, but I was still at an early morning panel. That 8:30 panel was Plot Twists with moderator Lori Armstrong, and panelists Matthew Clemens, Kate Flora, Karen E. Olson, and Penny Pike Warner. It sounded like the panelists where as surprised as I was with how successful this panel was. It really was one of the highlights of the weekend. Many of the panelists talked about their writing style and used clever cooking metaphors: having all the ingredients before you and throwing them in when needed vice baking with precision by following a predetermined recipe. Matt had a clever line about how sometimes you need to add salt, but you realize the salt is in a totally different store. It’s not easy to be this entertaining at that hour and these panelists managed it with ease.

I didn’t make it to another panel until the afternoon. At 1:00, I popped in to see the Cadaver Dog do his thing. It was amazing to watch this very intelligent animal work the room to find the “body.” Because the dog was actually on-duty, he didn’t stay for the whole panel, so I popped out to get David Swinson’s The Second Girl which was being given away in the hospitality suite.

By then, it was time to unload all my books – many of which had at this point been signed in the bookroom – and get myself into the zone for my 4:00 panel: The Literary vs. Pulp Traditions in Crime Fiction. I really can’t say enough about my wonderful panelists – Sheila Connolly, Chris Knopf, Katy Munger, and Elaine Viets. Needless to say, we didn’t come up with any conclusive answers but we sure had fun trying. We had a standing room only crowd for the panel – something like 120 in the audience and we were all thrilled and honored for the support. For the rest of the weekend I and my panelists keep running into people who were telling us how much they enjoyed the panel, so I think we did a good job. And I know a few folks who told me they purchased the audio recording (as did I), so hopefully more will get to hear our “enlightened” debate. 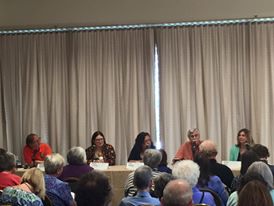 Friday ended with a dinner at Beasley’s Chicken and Honey. Their chicken pot pie was to die for – not literally. And then a brief stopover at the Death by Chocolate reception hosted by Stacy Allen and the Southeastern MWA chapter.