A Line of Blood –
The BOLO Books Review

Fans of crime fiction know that sometimes the criminal element of the story is the least interesting part of the reading experience. That is certainly the case with A Line of Blood by Ben McPherson. In this novel, the death at the center of the story is simply the catalyst for an in-depth exploration of marriage and family – and the bonds of loyalty inherent in both.

A Line of Blood is told from the viewpoint of Alex Mercer, a British citizen married to an American wife. Together they have a precocious eleven-year-old son named Max. As the novel begins, readers know very little about their lives except that they seem to be navigating the challenges of marriage and parenthood successfully. But when Alex and Max chase their family cat into the neighbor’s apartment, they start the family down a path that will leave none of them unscathed.

What the two discover is their neighbor, Bryce, dead in his bathtub from an apparent suicide. The police are called and a formal inquiry begins. Unbeknownst to Alex, this investigation is going to hit closer to home than he could ever have imagined. It seems that his wife, Millicent, was friendlier with Bryce than anyone knew. And that relationship puts her in the cross-hairs of what eventually turns into a murder investigation. 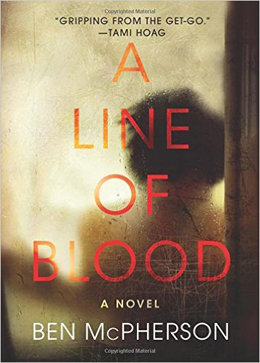 Circling through and around the official investigation are Alex’s parents, his best friend – Fab5, the victim’s landlord – Mr. Ashani, both Millicent and Bryce’s sisters, and the family psychiatrist – Dr. Nora Å. Exactly how each of these characters fits into the overall puzzle, readers will need to discover on their own – but it all revolves around how they relate to our central family.

Ben McPherson spends the bulk of the novel detailing how small doubts can fester within a marriage. Once trust is lost, new secrets are continually revealed until there is almost no returning to status quo. Except that in this case, McPherson also wants to show readers how strong loyalty can be. Humans have the unique ability to delude themselves into believing just about anything. Family fidelity is a very powerful thing – as the famous saying goes, blood is thicker than water.

As this family attempts to heal the fissures that have struck at its core, McPherson brings in professional help in the form of Dr. Å. This allows the author to introduce topics as far-ranging as post-traumatic stress syndrome, transgenerational trauma, and the gendering of crime. What manifests first as a meditation on marriage transforms into a study of guilt, blame, and responsibility.

There are no easy answers in A Line of Blood. When everyone is guilty of something, how do you determine where the onus begins? What Ben McPherson shows readers is that there is no such thing as a perfect person. Man is a complex entity and flaws are not the exception, but instead, the norm. It is how we handle our flaws that determine what type of person we ultimately become.

Whether justice is ultimately served in A Line of Blood will vary with each reader. What is never in question is how skilled a writer Ben McPherson is. He demonstrates a deft hand at crafting complex characters though the use of both dialogue and internal monologue. McPherson manages to make true declarations about the nature of family without the sugar-coated illusions so often depicted in genre fiction. A Line of Blood very much belongs in the sub-genre known as domestic suspense, but unlike the canonical works in that field, Ben McPherson allows the point-of-view voice to be that of the husband. Even with that alteration – or maybe because of it – this book belongs on the shelf next to all your favorite domestic suspense novels – it is more than worthy.