Over a decade after the original Nocturnes collection, John Connolly has returned with Night Music: Nocturnes Volume 2. As with the original collection, Night Music features short fiction in a variety of lengths, styles, and tones. And once again, Connolly proves himself a master at negotiating these shorter formats.

Book-ending the collection are two stories set in the same milieu. The first is “The Caxton Private Lending Library & Book Depository” – John Connolly’s award-winning contribution to Otto Penzler’s bibliomystery series. Connolly then returns to the Caxton Library later with “Holmes on the Range,” his contribution to the ever-expanding world of Sherlock Holmes pastiches. Both stories are must-reads for anyone who loves books, both the stories within and the physical object themselves.

John Connolly also returns to another setting he has used previously. In “The Hollow King,” readers are returned to the fantasy universe that served as the setting for Connolly’s masterwork – The Book of Lost Things. This tale is about loyalty and love. It is a credit to the author’s talent that he is able to provide an unexpected surprise ending even in such a very short story. 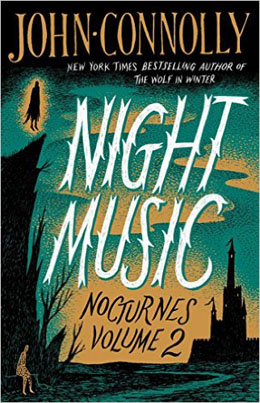 In the middle of the collection there is a grouping of multiple stories that represent parts of another larger work (which doesn’t currently exist, but certainly could one day). This work is titled The Fractured Atlas and the fragments here are stellar. BOLO Books has previously reviewed one of those fragments – “The Wanderer in Unknown Realms” – which has been released as a separate entity. Two of the new fragments, “The Djinn” and “Mud,” are probably the most fear-inducing stories in the Night Music collection. As with John Connolly’s series work, the supernatural elements are designed to make the reader think about larger real-life issues.

John Connolly adds to the current trend of zombies with “Lazarus.” Without being too religious, this is indeed an interesting take on that well-known New Testament story. Similarly, “Blood of the Lamb” explores Connolly’s fascination with spirituality and religion with the tale of a girl who may in fact be a saint touched by the hand of God. This story is made all the more powerful by leaving readers wanting more.

“A Dream of Winter” is a brief interlude about aging. “A Haunting” is a lovely little story about a man returning to the hotel room where he once had romantic rendezvous’ with his lost paramour. With “On The Anatomization of an Unknown Man (1637) by Franz Mier,” John Connolly turns the simple examination of an old painting into a tale of horror. This one could easily reside beside The Picture of Dorian Gray in the annals of scandal-inducing horror tales.

Night Music: Nocturnes Volume 2 includes other stories as well – any of which is perfect for a short reprieve from daily life. This collection is designed to be dipped into at will and readers are sure to be rewarded with some new favorites. Expect to see at least one of these stories on multiple award short-lists next season.

Disclaimer: A print galley of this title was provided to BOLO Books by the publisher. No review was promised and the above is an unbiased review of the novel. This review is also partly based on the audiobook version of this work which was purchased.