What You See –
The BOLO Books Review

First with the introduction of Charlotte McNally and later with that of Jane Ryland, Hank Phillippi Ryan has added to the crime fiction canon two of the strongest and most fascinating female protagonists of recent years. Their complex relationships with their family, friends and lovers, along with their rewarding and successful career paths have made them fan favorites. It will come as a surprise to no-one that critical acclaim and awards have followed Hank Phillippi Ryan from the start.

What You See, the fourth book in the Jane Ryland series, was recently released and like all of Ryan’s books, it provides readers with more of what they love while also moving the over-all story of Jane Ryland forward. In her now trademark style, Hank Philllippi Ryan manipulates multiple story threads, weaving them together in unexpected ways, until the end result is a beautiful whole-cloth quilt of a story. 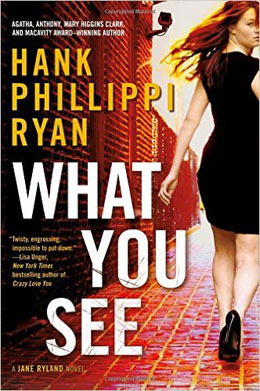 One of Hank Phillippi Ryan’s many talents is the ability to make readers care about her characters. As readers join Jane Ryland at the start of What You See, she is recently unemployed and unsure of what new avenues might be open to her. When a local TV network reaches out with a job offer, Jane is thrilled – although she knows that her policeman boyfriend may not be so excited. After all, a return to television reporting will mean they must once again keep their relationship secret. Before Jane really has time to process the offer, she is thrust into an emerging news story and her competitive instincts kick in.

There has been a very public stabbing at one of Boston’s landmarks and every media outlet wants the story first. Little does Jane know, but her detective boyfriend, Jake Brogan, is leading the investigation. Surveillance cameras, cell phone footage, and eye-witness reports should make this case a short-lived one, but nothing goes as planned and these plot complications will keep readers flipping pages.

Intermingled with chapters from both Jane and Jake’s perspective, Hank Phillippi Ryan also includes the point-of-view of some other secondary characters – such as the young surveillance camera operator, a neophyte reporter hoping for his big break, and some of the higher-ups in Boston government. How all of these stories will mesh together remains a mystery throughout much of the novel and will certainly account for the compulsive urge to read just one more chapter.

Further complicating matters are a personal crisis for Jane and a blast from the past for Jake. Jane’s sister, Melissa, reaches out to her asking for help when it appears as though Melissa’s future step-daughter has gone missing in what could possibly be a kidnapping by the girl’s mother’s new husband. Eliciting help from Jake, all parties involved begin to track the whereabouts of the missing child in an effort to return her home safely. Meanwhile, Jake’s headline-grabbing case has put him back into contact with a former flame who may still have feelings for the detective.

If all of this sounds intricate, it is. But with Hank Phillippi Ryan’s skill as a writer, readers are able to keep track of these multiple storylines until the final reveal brings them together in unforeseen ways. The main theme of this novel centers around our ability to trust what we see, but there is also a sub-theme involving family loyalty which accounts for some major developments at the end of the novel.

Remember back at the beginning of this review when I mentioned Hank Phillippi Ryan’s earlier protagonist, Charlotte McNally? Long-time fans will be excited to know that Charlie makes a brief, but important, appearance in What You See. That alone should be reason enough for readers to flock to this new novel by Hank Phillippi Ryan.