The Ex –
The BOLO Books Review

How far would you go to help an ex? What about if you felt like you had previously ruined that person’s life? That is the quandary facing criminal defense attorney Olivia Randall in Alafair Burke’s juggernaut of a novel, The Ex.

Jack Harris has had a rough life. His past with Olivia aside, Jack also suffered through the tragic murder of his wife – an event which remains unresolved in his mind. But things are about to get much worse. One morning in June of 2015, Jack is scheduled to meet with a new lady-friend he knows very little about. As it turns out, at the same time as their scheduled meeting, the rendezvous location happens to be the site of a spree killing in which three civilians are gunned down. With no surveillance cameras in the area, police have centered on Jack as their suspect – a decision based on the knowledge that one of the victims had a connection to the earlier murder of Jack’s wife. Was Jack holding a deadly grudge? 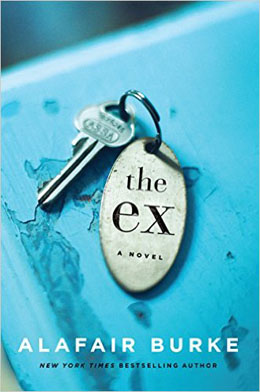 The Ex by Alafair Burke

With no one else to turn to, Jack’s daughter reaches out to Olivia, asking her to keep her father out of prison. Even with their rocky history, Olivia knows that Jack couldn’t be guilty of this awful crime and agrees to take on the case. What she uncovers calls into question everything she knows about Jack.

Alafair Burke is a former lawyer and current professor of criminal law and as such, she knows her way around a complex investigation such as the one necessary in a case such as this. The Ex takes readers behind the scenes of the justice system and elucidates the mechanics of the defense process. Since it is a suspense novel, the case at the core of The Ex contains more than its share of twists and machinations, but because of Burke’s skill as a novelist, it never feels false or forced.

Along with her wealth of knowledge about the law, Alafair Burke also loves to include hot topics from contemporary life in her novels. In The Ex, there are mentions of such things as texting etiquette, debates over curse words, and the proper procedures involved in press conferences after mass casualty events. Including these touchstones helps to ground the story in reality, making the reader feel connected to happenings which they hopefully would never need face in everyday life.

As the main character, Olivia Randall contains all the characteristics needed for a stalwart narrator, but she also comes with enough baggage to make her realistically flawed. Similar to her male counterparts in noir crime fiction, Olivia has no problems with drinking to excess and sleeping around. Like those men, Olivia is damn good at her job and adversaries engage at their own risk. And yet, The Ex is more traditional suspense than outright noir. Readers can debate for themselves why this might be, but for my money the answer resides in the fact that Alafair Burke never loses the heart at the center of her story. It is a rare book where readers can empathize with every character presented, but Burke understands that people are inherently good and sometimes the best intentions cause the most havoc. She also knows that justice is not always obtained – and rarely comes without a cost.

Alafair Burke is one of crime fiction’s most reliable storytellers. Crack the spine of The Ex and trust that she is going to entertain you and educate you – all while keeping you up way past your bedtime.