The latest Culver Valley novel by Sophie Hannah will be released in the United Kingdom in February. Like the others in the series, The Narrow Bed continues the stories of Simon Waterhouse, Charlie Zailer, and their extended team of detectives, as well as featuring a new complex mystery puzzle at its core for a whole new cast of characters.

Not only does Sophie Hannah craft sound psychological motives for her “villains,” but she also has a knack for tapping into current societal concerns in fresh and enlightening ways. With The Narrow Bed, these two writerly traits merge together in magical ways, creating another satisfying entry in one of crime fiction’s most consistent series.

At a time when the zeitgeist is prophesizing the continued diminishment of actual interaction in favor of social media contact, Sophie Hannah defies expectations by centering the killings in the new novel around the concept of friendship – best friends, in fact. The “Billy Dead Mates” murderer appears to be targeting best friends, killing each shortly after sending them a booklet containing portions of the same poem. 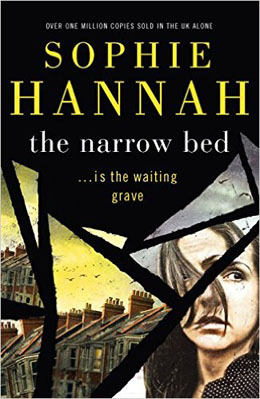 The Narrow Bed by Sophie Hannah

The idea of friendship and the various forms it can take permeates throughout The Narrow Bed. Along with the victims of the crimes, even the members of the Culver Valley police force are struggling with the term – not the least of which is Simon Waterhouse and his odd relationship with new member of the force, James Wing. A long-time subplot of the series involving Charlie’s sister also ties in nicely with this overarching theme.

However, the “Billy Dead Mates” case becomes more complex when it is discovered that famous comedian Kim Tribbeck received one of “Billy’s” infamous booklets but remains alive. Further complicating matters is the fact that Kim has no – and never has had – a best friend, or any friend. Why was she targeted by “Billy” and then seemingly spared death at his hands? The sections of the novel from Kim’s perspective are presented as portions of a memoir entitled Origami, which she has written about the situation.

Adding another timely topic to the novel, Sophie Hannah explores online media and they power of the Press. Occasionally throughout the novel, there are newspaper articles written by the controversial – and very outspoken – feminist Sondra Halliday. In these articles, she condemns the police department for not telling the public that this is another case of a man killing women in an effort to dominate and suppress them. She conveniently overlooks the fact that one of the victims was male, however.

Novels by Sophie Hannah are rarely leisurely reads. Like her other works, The Narrow Bed requires the commitment of the reader to keep a multitude of names and dates in mind while consuming the book. Her plots are convoluted and multifaceted – but they are also always surprising and satisfying for those willing to stick with it and play the role of active reader. This novel in particular is filled with mentions of books and the concept of writing, so bibliophiles are sure to love it.

The Narrow Bed is the tenth book in the Culver Valley series. With the exception of one minor sub-plot, new readers can easily enjoy this novel. Sophie Hannah’s characters are ones readers are sure to become invested in – making new readers, lifelong fans.