The Passenger – The BOLO Books Review

Lisa Lutz has been writing consistently high quality work for a number of years now. She has written across different styles and tones – all with equal aplomb. Similar to Alison Gaylin and Gregg Hurwitz, her 2016 release seems poised to break her out to a wider audience. On the surface, The Passenger is a standard issue thriller, but with Lutz’s tendency to bury deeper meaning in her writing, regardless of genre, readers should plan to come away with new insight into human nature.

The Passenger is the story of Tanya Dubois, a woman who leaves her husband’s body at the base of the stairs and begins a series of transformations in an attempt to escape from her past and herself. Tanya eventually meets up with a bartender named Blue and the two of them become a Thelma and Louise-style duo, culminating in an exciting and unexpected denouement. This is a road trip unlike any you have taken before. 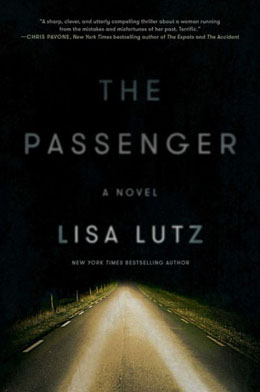 The Passenger by Lisa Lutz

The novel is structured in such a way that the various sections divide the over-arching plot by highlighting vignettes of Tanya’s life under different identities. These sections are labeled with the name of the woman whose identity Tanya has assumed at each stage of her extended journey. In a demonstration of Lisa Lutz’s skill as a writer, each of these new identities require the development of a new “personality,” while also keeping the underlying true nature of Tanya’s personality just below the surface, ever apparent to the reader. Lutz does this in subtle, but successful ways.

Readers who are not fans of the unreliable narrator or require likeable heroines are probably not the intended audience for The Passenger. Tanya is not so much unlikable as she is an enigma. Because of this – and the constantly changing temperaments she must exhibit – it is a bit harder to really connect with her. One suspects that this is part of Lisa Lutz’s technique, since Tanya herself is unable to connect with herself or others. As far as unreliable goes, I will let each reader come to a judgement about that on their own.

The title of The Passenger is likely to be one that is discussed for a very long time. It is refreshingly more metaphorical than the standard crime fiction book title. Of course in part it refers to the character of Blue who tags along on portions of Tanya’s trek. But more importantly, in my view, passenger calls to mind that unseen part of ourselves that we carry with us through life – the authentic self. Beyond even that, passenger also calls to mind a person who is not in control and one who might be giving the directions. These are two diametrically opposed concepts, which fits nicely with the complexity of the novel.

The Passenger is a fast-paced read, but also one of those books where reaching the end only causes you to want to return to the start to see how it was all constructed. It is only fitting that an author like Lisa Lutz who can successfully morph from one style to another would write a stunner of a novel about a woman who just might be the ultimate chameleon.