What Remains of Me –
The BOLO Books Review

High in the California hills and deep in the shadow of the legendary Hollywood sign, exists a glamorous world few are provided access to. Alison Gaylin’s What Remains of Me pulls back the curtain on the movers and shakers of the movie industry, thereby revealing them to be as flawed as the rest of us – or maybe more so.

The reader’s guide to this decadent world is Kelly Michelle Lund. Gaylin presents her story via two distinct time periods which proved to be seminal in Kelly’s life. In the historical sections of the novel, Kelly is a young, somewhat naïve child of the 1980’s, while in 2000, Kelly is a cynical, possibly depressed woman. Of course, between the two time-periods was a lengthy prison stay – and a whole lot of secret keeping.

In 1980, Kelly Lund was a vulnerable girl. Her sister had recently committed suicide, her home life dull and average, and her time at Hollywood High marred with insecurity. So when Bellamy Marshall invites her over to the estate, Kelly feels as though things are finally looking up. The Marshall family is a Hollywood dynasty and might usher Kelly into the “it” crowd – but more than anything, Kelly just wants a friend. As a child with carte blanche, Bellamy Marshall is prone to getting herself into scandalous trouble and has no problem bringing Kelly down with her. 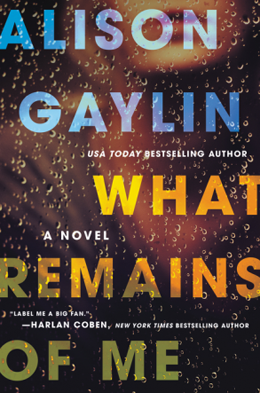 What Remains of Me by Alison Gaylin

When an unexpected – and unwanted – screen test with famous director John McFadden is arranged for Kelly, she simply agrees so as not to be ostracized once again. Shortly after that audition, McFadden is shot dead and Kelly is arrested. Unwilling to explain exactly what happened, Kelly Lund does her time in jail – becoming a tabloid media sensation in the process. Everyone delights in pretending they know more of the story than they do.

Now that she is free and the new decade has begun, Kelly is ready to start over. She is married to Bellamy’s brother, Shane, and the media attention seems to be dwindling. That is until the Marshall family patriarch, Sterling Marshall, is murdered and Kelly once again becomes the prime suspect. Only this time, some unexpected allies rally around her, wanting Kelly to tell the whole truth.

Alison Gaylin masterfully documents the tale of these two murders side by side. How they blend, reflect, and enlighten each other is both subtle and profound, but appears virtually effortless in Gaylin’s hands. It is possible to get so engrossed in what is happening on the page that you forget there is a puppet master working behind the scenes, manipulating the proceedings. Readers will find themselves audibly gasping, as revelations are uncovered time and again in both eras.

By the end, there is little doubt that Alison Gaylin knows the underbelly of Hollywood. Stardom rarely comes without a cost. By populating What Remains of Me with archetypal characters, she allows readers to see connections to modern-day Hollywood royalty. Let’s face it, Hollywood is full of people who by virtue of their zip code alone feel that they don’t have to grow up – the land of perpetual youth, or at least the fervent attempt to cling to every last visage of it.

Alison Gaylin also understands the ever-present influence of the media – especially tabloid journalism – and uses this to full effect throughout the novel. Even the recent resurgence of true crime tales is highlighted here with references to a bestseller based on the McFadden murder. The plot of the novel also includes references to an online dating site aimed at cheating spouses, a cult-like hippie commune, and a high-profile photography exhibit featuring controversial work. The more things change, the more they stay the same.

Keep in mind, because of Gaylin’s skill at teasing readers with new developments, What Remains of Me demands to be read in as few sittings as possible. Don’t start this one on a night when you need to get to bed early, as that simply won’t happen once you are introduced to Kelly Lund and her life of secrets. I just hope that What Remains of Me and Alison Gaylin are not forgotten by the time the 2016 award nomination process rolls around. It would be a shame for this work not to get the recognition it deserves.