Like the sun slicing through the smog-encased Los Angeles skyline, Lou Norton broke through as a shining hope of diversity in Rachel Howzell Hall’s debut mystery, Land of Shadows. In a genre which can at times seem too cookie-cutter-ish, Hall’s fresh and urban voice called to readers and instantly converted them to fans. Rachel Howzell Hall, Lou Norton, and the entire gang return in Skies of Ash, the second novel in this captivating series.

Skies of Ash begins with Elouisa “Lou” Norton being called to the scene of a deadly house fire in the upscale neighborhood of Baldwin Hills. Three fatalities resulted from the engulfed home – Juliet Chatman and her two children. Juliet’s husband, Christopher, was injured in his attempts to save them. With the help of her partner, Colin Taggert, Lou begins her investigation immediately, asking to interview the neighbor who called 911 and any others that might have seen anything suspicious.

Before long, Lou zeros in on Christopher Chatman as her prime suspect. Unable to convince the others on her team, everyone continues to dig into the family’s background. Unlike what they have been led to believe, the Chatman family was not looking at the world through rose-colored glasses. Illness and suspicion have tainted the happy marriage and with their son having a history of starting fires, it seems that all generations of the Chatman’s have been affected. 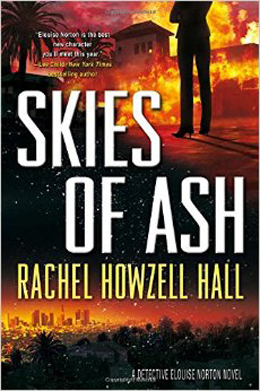 Meanwhile, on the home front, Lou is dealing with her own doubts about her husband’s ability to remain faithful. Already having discovered his lies, Lou can’t seem to forget his past mistakes and start fresh. A fallout with Colin during the case means that Lou can’t even use work as an escape from the problems caused by the men in her life.

Rachel Howzell Hall keeps the focus tight in the second novel. The entire plot of Skies of Ash covers only six days. As a result, the methods of investigation Lou and her team employ in their efforts to uncover the arsonist unspool in realistic fashion – with one clue leading to the next interview, and so on and so forth. Readers can almost feel the toll the case and her personal issues are having on Lou as the novel progresses.

Second books in a series are always tricky to pull off, so Hall’s decision to slow things down was very smart. Readers have already bonded with Lou Norton in Land of Shadows, so in the second novel the author has allowed that connection to be cemented. It is only at the very end – with the last two words in fact – that Rachael Howzell Hall throws something at Lou that will rock the worlds of both the detective and the reader.

While readers will have to wait for the third novel, Trail of Echoes, to see how this new development is going to affect Lou, there is no doubt that Rachel Howzell Hall’s fans will be there waiting to experience the aftermath. Knowing Lou Norton as we do, there is no way she is going to take this lying down.