When you volunteer at conferences like Bouchercon and Malice Domestic, you are doing so much more than helping out the organizers of the event – which in and of itself would be rewarding enough – but you are also opening yourself up to meet some new people destined to be future friends.

That is exactly how I first met Ovidia Yu. I believe that we were stuffing envelopes for the book bags and we got to chatting. She had heard of and was a fan of BOLO Books and I was intrigued by the premise of her first novel. Much chatting and laughing ensued over the new few hours.

And today, I am happy to call her a friend and to invite her here to talk with everyone about the inspiration behind her third Aunty Lee mystery – Aunty Lee’s Chilled Revenge (A Singaporean Mystery). 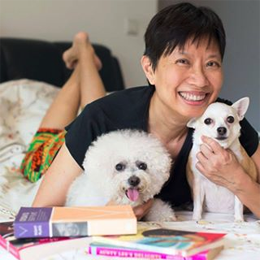 OVIDIA YU:  I started this book when I was really angry at something that happened in Singapore: an expat woman—a Credit Suisse banker’s wife—who adopted a rescue dog had the puppy, Tammy, put down though she had signed an agreement to return her to the re-homers should the adoption not work out. The puppy had gone through health checks and evaluations and been found healthy and good natured before the adoption.

The story: Apparently the woman had called the re-homers and said she wanted to return the puppy. She was asked to keep the puppy for a couple more days while arrangements were made and had seemed agreeable. Then when the animal welfare volunteer called that weekend to ask when she could come to collect the puppy, she was told the puppy had been given away to ‘a friend’. But Mrs Adopter refused to say who this friend was. When Ms Re-Homer went round to her house to try to find out more (having a policy of checking up on the premises adopted dogs are put in), Mrs Adopter called the police, saying trespassers were harassing her. The police, after hearing both sides, asked Mrs Adopter to tell them where the puppy was. Only then did she admit that she had lied–she had taken the puppy to the vet and, telling the vet that the dog was aggressive and had bitten her children, had had it put down.

I wasn’t the only one upset by what happened. There were stories in the newspaper, a ‘Justice for Tammy’ page on Facebook garnered over two thousand ‘Likes’ over a weekend and even the Law Minister weighed in after seeing the contract and records of SMSes between Mrs Adopter and the volunteers and helped them get legal representation.

But when I started writing Mrs Adopter into the next Aunty Lee mystery, she started to intrigue me. What was this woman like in the rest of her relationships? If she was so willing to lie to people and then lie about lying, what did her children think of her? How did her husband deal with complaints about her that people were sending to his employer and the British High Commission?

Even to me as an observer the online rage was frightening. It must have been terrible for her and her family to live with. I suspect at least some of it was directed at the image people had of her as a wealthy expat wife who felt she could pretty much get away with ignoring contracts and agreements here, then just going home. But in fact a couple of dog owning expat neighbours (one Austrian, one American) were even more angry than I was and started a boycott of the vet clinic where the puppy was put down.

But following the story also made me think about what it must feel like to be the victim of internet bullying and online vigilantes. There were also cruel comments directed at the volunteer; how she cared so much about dogs only because she was too ugly to get a husband.

So even though I started this book in anger, wanting to kill off the puppy killer and the vet who had done the evil deed, by the time I finished writing it I was thinking more about what had made Mrs Adopter the way she was and what the experience of web rage might have done to her and her family. And I also got to look at it through the eyes of Aunty Lee (who still doesn’t quite understand social media) and Nina (who doesn’t understand how people can get so worked up about animal rights while mistreated children go hungry).

And yes, I got to kill them off—on the page—so I’m happy.

I hope that this peek behind the curtain has intrigued you and encourages you to make the acquaintance of Aunty Lee and her gang. And remember the next time you are at a book event, volunteer! You just never know who you are going to meet.