One of the drawbacks of this book blogging gig is that I often discover shadow souls in other parts of the world – folks that I would love to meet, but the distance makes that more difficult.

It is no secret that I am a huge fan of the crime fiction originating in the UK (and overseas in general), so when J. M Hewitt told me that she was going to be visiting the States this Spring, I just had to have her stop by the blog. While I won’t get to meet her in person on this visit, she is here today to tell us all about the things she is most looking forward to on this visit.

And she will be sending along a copy of her book while she is local, so you can look for more on that at the end of the post and in future updates here on BOLO Books.

J.M Hewitt:  My expectations on coming to the U.S – well, they’re huge, and I mean Grand Canyon size! I’ve visited the state of Florida three times but this visit, this is the big one. It’s my partner’s 40th birthday and this trip has been planned to be a no expense spared holiday of a lifetime. And the places we are going to in America have been carefully selected to reflect what we really want to experience and see. First up is L.A and a stay on the Queen Mary. Do you guys know of this Long Beach based ship? It’s positively steeped in history, from a luxury cruise liner to playing a part in World War II. We are going to Vegas and from there driving to the Grand Canyon. Over the last decade, we have taken many road trips together, my most memorable was driving through Holland to Dunkirk, via a mixture of dazzling countryside and over all of the dams, and taking a car ferry over a tiny river – all the ferry had to do was turn around and we were at the other side. But driving through that desert and reaching the 277 mile long canyon, that’s something I have very high expectations of.

But the east coast is where we will stay the longest, a whole week in New York. Let’s be honest, it’s the capital of the world, playing a part in countless movies, books and T.V series. Preparing the itinerary for New York got me thinking back over some of my favourite novels that feature the city, and now, looking at the list I’ve written, I can see just how varied they are in both age and genre.

A Tree Grows in Brooklyn by Betty Smith, a coming of age novel about a girl and her family living in Brooklyn.

American Psycho by Bret Easton Ellis, a tale similar in tone to Dexter, about a Manhattan businessman who is also a serial killer.

Sex and the City and One Fifth Avenue by Candace Bushnell, depicts the lives of women that we all secretly want to live.

The various Dark Tower novels by Stephen King which are dystopian in genre; both in New York City and the other worlds that the books explore.

Catcher in the Rye by J.D Salinger, a book written for adults but now widely read by all ages, again, a coming of age / literary realism story.

The Goldfinch by Donna Tartt, literary fiction that traverses the U.S, from New York to Las Vegas, and the only book I know of that has coined a phrase (goldfinching – look it up, there are numerous articles on it!)

Chances by Jackie Collins, in my opinion her best book, I particularly love the portrayal of the 1977 blackout of New York.

So that’s a wide and varied list, and one of the things I’m most looking forward to during my stay is visiting the books shops. Books really are my life, and I love the cover designs (and sometimes titles) that vary ‘across the pond.’ I’m intending to go to The Mysterious Bookshop, this name keeps cropping up over and over again, and I’m deliberately leaving room in my suitcase for all of the books that I know I’m going to buy. I hear Lionel Shriver has a new book out, The Mandibles, and that one is definitely on my list.

In my own novels I hanker after location and settings, they play a very important part, and I’ve got a sneaking suspicion that if you look out for my future work, some of these destinations may very well play a part.

If any readers of the excellent BOLO Books Blog have any suggestions for my upcoming trip to the States, I’d love to hear of them! 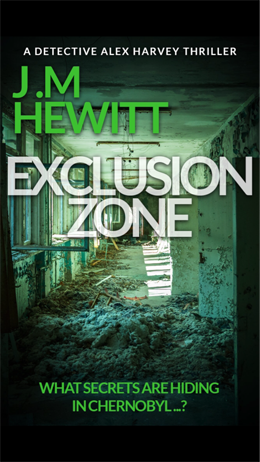 On 26th April 1986, reactor four exploded at the factory in Pripyat, Chernobyl. At the same time teenager Afia Bello vanished from her home without a trace.

The damage from the nuclear fallout is examined over the following weeks, months and years by Afia’s younger sister Sissy, as she unwittingly uncovers clues relating to her sister’s disappearance, and the secret life that Afia kept hidden from her family.

In the summer of 2015 Private Detective Alex Harvey is hired to investigate the disappearances that have been occurring within the exclusion zone. He can think of only one person to bring along with him to help; Ukrainian national Elian Gould.

Elian – who was adopted at birth – has her own reasons for accepting the job; namely to search for her own family history which has always been a mystery to her.

But the remaining citizens of Chernobyl are hiding their own secrets and with a darker force at work, the missing person’s case suddenly turns into something much more serious.