What happens in Group stays in Group. This tenet of group therapy has allowed it to be a successful method of treatment for decades. However, now in the hands of Mark Billingham, it also becomes an impediment to a murder investigation. Die of Shame, the recently released stand-alone novel from Mark Billingham, explores the nature of addiction, techniques for treatment, and ultimately, reasons for murder.

On Monday evenings, a group of four addicts gather at the home of their therapist for their weekly session. Early in the novel a new patient is added to the mix allowing for a change in the dynamics of the group and exposure of loyalties existing within the small gathering.

Their doctor, Tony DeSilva, is intent on digging deeper into the reasons for each of their addictions and his technique for doing so might lead to death. Having each of the patients explore an incident of shame which occurred in their past seems like both a valid psychoanalytic method and recipe for disaster. 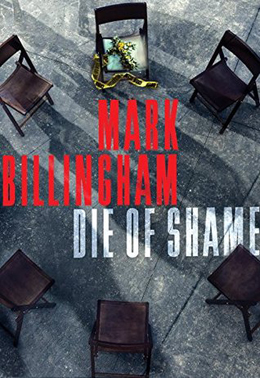 Die of Shame by Mark Billingham

Mark Billingham cleverly conceals the identity of the murder victim during the early part of the novel. As time shifts between the past and the present, Billingham even obscures the gender of the victim for a while. Crime fiction fans will know that it is a member of this closed group, but revealing things in this manner allows for a longer period of speculation on their part.

The lead investigator on this case is Detective Inspector Nicola Tanner and like all of Mark Billingham’s police characters, she is well-rounded, complex, and not without her own personal issues. Billingham has never been one to shy away from diversity in his novels, so it is no surprise that Nicola is a lesbian. Complicating matters for her is the fact that her wife just might be dealing with some addiction issues of her own.

Addiction can lead to a host of different emotions; everything from rage and insecurity to jealousy and beyond. Given this, there is no shortage of motives in this case. Further confounding readers are a series of chapters depicting a prison visit and conversation. Again, who is doing the talking and what they are talking about is kept under wraps until late in the novel.

Fans of Mark Billingham’s series will be delighted to know that both Hendricks and Thorne make brief appearances in Die of Shame. This is a nice touch for long-time readers, but will have no negative impact on newcomers. Die of Shame is the perfect starting place for those unfamiliar with the excellent novels by Mark Billingham.

MD/DC/VA followers: Mark Billingham will be appearing locally on Thursday, June 23 at The Ivy Bookshop. At that event, Mark will be in conversation with local superstar, Laura Lippman.