The elevator pitch for Ben H. Winters’ new novel, Underground Airlines, makes it seem like an audacious undertaking fraught with potential risk and ripe for controversy, but the end product shows great restraint with respect for our not-always commendable past and enlightenment towards a better future. Make no mistake about it, however, Underground Airlines is poised to be one of the most talked about books of the year.

With Underground Airlines, Ben Winters has crafted an alternate history saga. Set in the modern world as we know it – except that the Civil War never occurred and slavery is still legal in the Hard Four (four territories in the Southern U.S.) – Underground Airlines reads very much like a novel of the moment.

Our focus on this journey into the altered universe is Victor, a black man working as a bounty hunter. His work is much like that of modern day repo men, only instead of repossessing vehicles, Victor is responsible for securing runaway slaves. Victor’s work takes him to the Northern areas where he is searching for Jackdaw, a slave on the lam from a cotton clothing company called Garments of the Greater South, Inc. 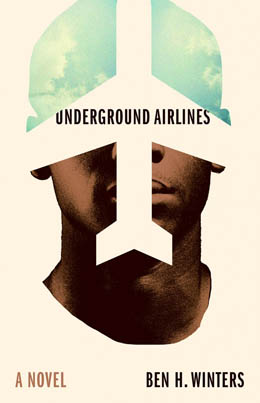 Victor’s employer is a man with secrets of his own and the discovery of those send shock waves through Victor’s mind. He also encounters a young white woman with a mixed-race child who will reveal personal attributes Victor never knew he had buried inside. This simmering, slow-burn thriller takes Victor on both a physical journey and a personal excavation of character – each of which will grip the reader tight.

The masterwork here is the world-building that Ben Winters does behind the scenes. Most common in fantasy novels, this level of created history is rare in the crime fiction community. As the novel progresses, small tidbits about how the world came to be the way it is are exposed – all very plausible and fascinating. I would not be surprised to see Winters return to this created world to tell other stories. The real key to the success of the novel is that Ben Winters never allows the world-building to intrude on the forward moving plot of the book.

Ben Winters’ writing is as crisp and efficient as his ideas are sharp and precise. This made-up world has just enough echoes of our own world to cause folks to stop and think. The novels complex characters beg for examination and reward that study with authenticity. Don’t mistake this to mean that the writing feels academic however, this is a novel that reads like most standard thrillers.

With Underground Airlines, Ben H. Winters has drafted a provocative treatise filled with deep truths and deeper empathy. Rather than feeling controversial, the novel resonates with humanity. By examining slavery in a new way, from a completely original angle, Ben Winters sheds new light on the shadows cast by this unfortunate legacy within our history. Read it and be moved; read it and react; read it and rise up.