With Blue Moon, Wendy Corsi Staub returns readers to Mundy’s Landing for Book Two of her addictive trilogy. Fans who have already read Blood Red know what to expect, but the good news is that Blue Moon reads just as well as a stand-alone as it does as part of this excellent multi-part saga.

Mundy’s Landing is a small town dependent on its infamous past. One hundred years ago, the Sleeping Beauty Murders rocked this quaint community. Still unsolved, the case of these three girls who were killed and placed in the bedrooms of different Victorian homes in the area continues to fascinate folks. Each year, the town hosts a “celebration” where armchair detectives congregate in an attempt to suss out the killer. The only problem is that the historical crimes may also be acting as inspiration for some modern-day nefarious activity.

When Annabelle Bingham moves her family into one of these three so-called Murder Houses, it isn’t very long before she begins to question that decision. Her anxiety prone son is acting out and she herself has witnessed some suspicious activity around their new home. Unsure where to turn, Annabelle must rely on her own strength to protect her loved ones. 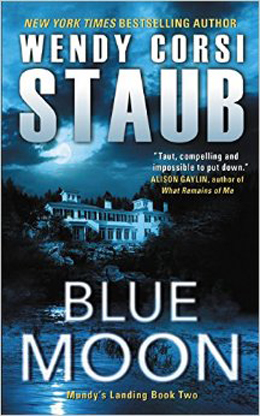 There is more of a focus on the old crimes in this middle novel of the series. There is no denying that the Sleeping Beauty Murders are creepy-as-hell. Wanting to know how the past ties into a modern-day crime spree – a series of girls once again vanishing from Mundy’s Landing – will keep readers turning the pages, but it is the setting that is the real star here. Mundy’s Landing continues to evolve into a fully developed location, tempting readers to visit, while keeping them on their toes about which citizens are truly trustworthy.

Just as in the first novel, the chapters in Blue Moon are separated by “documents.” Whereas Blood Red included a variety of newspaper clippings and historical documents to acquaint readers with the towns origins, the documents this time are limited to diary entries from the Sleeping Beauty Murderer and case files related to the current abductions plaguing the community. In both cases, the identity of the participants is kept cleverly concealed.

Blue Moon is a fast-paced read that will leave readers craving more. Wendy Corsi Staub is currently working on Bone White, the final book in the trilogy. There is a small taste of the next book at the end, but readers will have to wait until next year to travel back to Mundy’s Landing. I suspect many, like myself, will spend some time in the interim imagining what is happening in this odd setting populated with even odder townsfolk.