Blood on the Bayou – The BOLO Books Review

Blood on the Bayou is the latest Bouchercon Anthology – release recently at the 2016 Bouchercon in New Orleans.

This collection of stories is 100% solid and is as diverse as the city of New Orleans itself. I could have reviewed any of these stories as there is not a bad one in the bunch.

As it is, I had to make some choices. I chose 14 stories (out of 22 total): choosing stories from throughout the whole collection, ones by authors at various stages in their careers, and stories that covered the different styles and tones that are evident throughout the collection. These are some of my favorites, but again, there is not a bad story in this entire anthology. Buy Blood on the Bayou and read them all: you will find a few favorites as well. 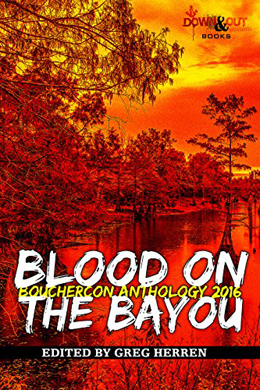 BLOOD ON THE BAYOU

In this story about Icon, the daughter of a celebrity and her long-standing relationship with her personal nanny, Alison Gaylin once again delves into a common theme found in her work – the lives of those in the spotlight and the toll this takes on them. This very contemporary story works well taking place in and around the historic setting of New Orleans.

Local New Orleans author De Noux tells the tale that blends the serious with the ridiculous. The struggles of a female officer on the police force juxtapose with a case that is as odd as it is entertaining.

BV Lawson – And Down We Go

In Lawson’s story, several friends on the way home from funeral crash their car into the Barbue Bayou. As they contemplate escape methods before drowning, secrets are revealed. Lawson’s plot requires the use of some metaphors and similes which are a pleasure to read during the tense moments within the sinking car.

Helen Hawthorne and Margery Flax, characters from Elaine Viets’ Dead-End Job series, star in this story which takes readers from Florida to Louisiana. As with that series, this story about a missing persons case is a light, fun read where humor abounds and the good gals wins. This one is like a buddy picture – if Thelma and Louise were the buddies.

Edith Maxwell – The Mayor and the Midwife

In this story, Edith Maxwell incorporates Rose Carroll, the midwife character from her historical mystery series. Amidst the skillfully rendered images from New Orleans’ yesteryear and Maxwell’s masterful use of local dialect, Rose delivers both a baby and justice.

Deborah Lacy – Blowhards on the Bayou

This collection wouldn’t be complete without a death during Mardi Gras. Fortunately, Deb Lacy has us covered. When Simone Duplanter is discovered seemingly poisoned on a Mardi Gras float, the closed circle of suspect narrows on the other ladies aboard the floating monstrosity. Subtle humor and social commentary add to this delightful murder mystery.

In this clever story, Connolly documents the murder of a police officer as witnessed by a New Orleans native. There is not a wasted word in this brief story, which only serves to elevate the reader response at the conclusion.

This story is set in the days after Katrina. A man is left trapped in the attic of his home, disoriented from struggling in the harsh elements for some indeterminate time. He thinks back on his wife’s plea for them to evacuate and laments his own lackadaisical attitude and the resulting tragedy that followed. Here, Herren’s writing is both poignant and pointed.

In my favorite story in the collection, Brown writes about a serial killer who uses the opening chords of Dueling Banjos (the theme from Deliverance) as an integral part of the ensuing crime spree. Take this opening line as an example of the sublime nature of Brown’s writing: “The banjo was found, one day, lying on a floor, smashed–dried blood caking the strings.” This story just begs to be read aloud – where a beautiful turn of phrase butts up against a horrific twist in just a few words.

Of all the stories in the collection, this is the one that nails the setting of New Orleans as tourists envision it. Two sisters and their Grandmother attempt to understand the powers of voodoo. Filled with mentions of food from the region, Cajun terms that sound exotic, plus the heat and humidity in the air, readers will find this a cultural tour through the region. Barley blends time changes skillfully to demonstrate how our history influences our present.

Billy Billeaudreau is the hottest new singer on the circuit and he stole Zack’s girlfriend. In this light-hearted story, Zack and his friend Pete work out a scheme to get her back during the Boggy Bayou Music Festival. But sometimes revenge is sweeter when profit is involved. Moran’s story unfolds with ease and feels reminiscent of caper stories of yore, but with a decidedly modern aesthetic.

When Violette Lemaire leaves New Orleans for Pittsburgh, she takes some of her heritage with her. Bitter over a missed promotion, Violette employs some of the voodoo her Grandmother shared with her; but when the end result is the death of her rival, she faces confusion and regret – and the need to make things right. Milliron skillfully uses the dichotomy between New Orleans/Pittsburgh and Voodoo/Christianity to full effect in this compelling story.

Ending this collection, legendary author David Morrell writes a bit of a wish-fulfillment tale. Modern readers will relate to the feelings the main character has, albeit maybe not so much with what he does about those feelings. This then morphs into one particular case taken on by Cavanaugh and Jamie – characters who appear in one of Morrell’s series. This one is a good lesson that vigilante justice is never the best option.

Intrigued? How could you not be? Follow the link under the image above to order this stunning collection of stories, dripping with the essence of New Orleans itself.