(This is the third and final in a series looking at the work of Bouchercon 2016 Guests of Honor.)

With Huntress Moon, Alexandra Sokoloff has used her background in screenwriting and her interest in feminism to aid in writing a thriller that manages to be both realistic and cinematic, while staying clear of the tired stereotypes and lazy troupes which are so common in the genre.

Huntress Moon finds FBI Special Agent Matthew Roarke on a multi-state manhunt for a woman who may have been involved in the death of a fellow government agent. His investigation exposes a pattern of deaths at which this woman was always present. Could she be a female serial killer – the rarest of murderers? 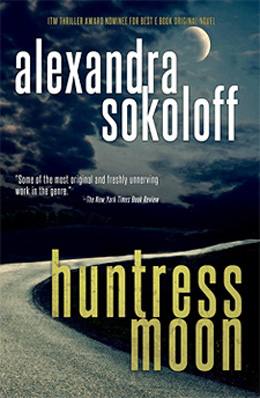 Throughout Huntress Moon, this woman goes by many names, but the one that will linger in the reader’s minds the longest is Santa Muerte or Lady Death. This femme fatale defies every expectation readers will have when they begin her story. What starts as a game of cat and mouse morphs into mutual respect and some level of uneasy alliance.

The action in Huntress Moon begins on page one and never slows until the climactic battle has ended. Just when readers think they know how this story is going to play out, Sokoloff throws in a curve ball to change things up. Since this is the first novel is a series, loose threads abound, but readers will cherish this knowing that answers will rise to the surface in later installments.

Alexandra Sokoloff’s prose is extremely readable and she has a gift for imparting personality to even the briefest bit character with just a few well thought out characteristics. These characters feel real – they are crafted as flesh and blood people one might meet on the streets of any city. For example, when Lady Death rests on the sands of a California beach, she is stumbled upon by a young boy with whom she immediately feels a connection – a connection which the reader also experiences in their gut. Far more than just a plot device, this boy’s hold over both character and reader moves the story along in organic ways.

The time-span of the novel covers roughly a week in time. With short chapters and crisp dialogue, readers will speed through Huntress Moon eager to discover what adventures await in subsequent novels. Two more books in the series are already available with another on the way later this year.