Most crime fiction readers are aware that Hank Phillippi Ryan came to fiction writing by way of her highly successful investigative reporting career on Boston television, so it should be no surprise that her novels often feature hot-button topics which affect and reflect the society we live in. For example, while her new book – Say No More – covers a wide range of fascinating of topics, the core of the novel focuses on the epidemic of rape on college campus.

“Shelves holding what college was supposed to be, a table of women illustrating what it actually was” (Ryan, Say No More)

At the start of Say No More, Jane Ryland is settling into her new position at the television station. With her producer, Fiola Morrello, she is launching a documentary style news segment. Their current topic of inquiry is the proliferation of rape and IPV (Intimate Partner Violence) that exists on college campuses nationwide. They have released a request for anonymous interview subjects and a woman who calls herself Tosca has reached out. 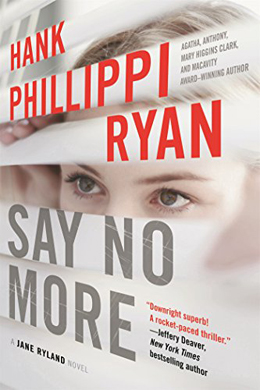 Meanwhile, Jane’s homicide detective boyfriend, Jake Brogan, is investigating a drowning death in the high-rent enclave known as The Reserve. Coincidentally, the victim was an adjunct professor at a local Boston college. Longtime readers of this series know that Jane and Jake have had some troubles keeping their private and professional lives separate. Fortunately, even though they are both circling college campuses in their day-job situations, they have gotten better at managing any conflicts that might arise.

As has become a trademark of this series by Hank Phillippi Ryan, the author uses multiple viewpoint narrators to tell her tale. In Say No More, there are five points of view – Jane, Jake, Isabel Russo (Tosca), Edward Tarrant, and Willow Galt. Edward is an administrator at the college and Willow is a neighbor who resides in The Reserve – a woman who just might have the biggest secret of all.

Every character that Hank Phillippi Ryan creates is fully developed and fascinating, presented with depth and verisimilitude. This serves to keep readers on their toes, as it is virtually impossible to guess which characters will play a more significant role later in the plot. Every one of them is vying for the reader’s attention, but fittingly, it is Jane and Jake that instill the deepest loyalty.

The plot of Say No More covers a five-day span of time and Ryan makes this very credible by including minor details – such as meals and sleep – to make the timeline workable. Sub-plots such as Jane’s involvement as a witness in a fender-bender accident and Jake’s concerns about a police informant not only demonstrate the complexity of their lives, but also allow opportunities for further elaboration on their network of colleagues.

In true Hank Phillippi Ryan style, these multitudinous threads intersect in surprising ways – ultimately coalescing into a harmonious whole. Because Say No More is fascinating, surprising, and keeps readers on their toes, it will no doubt entice new readers to the Jane Ryland series – readers who will quickly join the existing fan base in longing for the next novel.