Readers love a character they can root for. Someone they can relate to, respect, and learn from – and Claire Codella is just such a character. First appearing last year in Carrie Smith’s vastly underappreciated debut, Silent City, Codella returns this month in the even stronger sequel, Forgotten City.

As created by Carrie Smith, Claire Codella is an NYPD detective hell-bent on doing the right thing as often as possible. At the start of Forgotten City, she has just recently returned to the police force after an extended absence due to cancer treatment. Still unsure of her future – both with the department and with life in general – Codella makes every moment count. 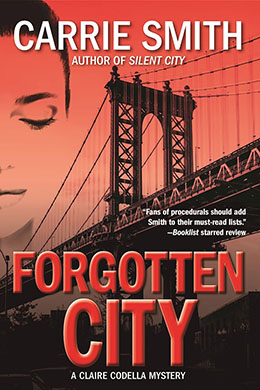 So, when she is asked by the daughter of Lucy Merchant to investigate the woman’s death, her reluctance quickly grows to suspicion. Lucy Merchant was a middle-aged Broadway legend living in an elite extended-care medical facility due to the ravages of early onset Alzheimer’s disease. Her sudden death confounds her daughter, but oddly Lucy’s powerful husband seems to be taking it in stride. And as Codella begins to investigate deeper, the powers-that-be at the care facility start closing ranks – but what are they hiding?

In a time where there is much discussion about that lack of diversity in crime fiction, Carrie Smith has populated her novels with a Benetton commercial’s worth of unique individuals. It is rare that one novel presents so much diversity, but then with a setting such as New York City, it never feels inauthentic. Standing at the forefront in the case of Forgotten City is Brandon Johnson, a transgender nursing assistant who could easily carry a series of his own. Brandon is as complex a character as one is likely to find in fiction, based largely on the fact that he is crafted with skill, compassion, and true verisimilitude.

Carrie Smith’s writing style is extremely addictive – easy to read, short chapters, and wonderful dialogue. Reading Forgotten City is like sinking into your favorite easy chair for a lengthy discussion with a favorite friend. As a procedural, the criminal investigation follows the expected pattern without ever feeling derivative.

By the end of Forgotten City, the case at hand has been solved, but there is still much of Claire Codella’s story yet to uncovered. This series is going to be around for a while and I am confident that as more readers discover the books, the fan base will only continue to grow as well.