Hopefully by now you have heard that Ian Rankin will be participating in a rare US book tour to celebrate the 30th anniversary of his first John Rebus novel. He will be making several stops local to me – in Baltimore, Washington DC, and Arlington VA – but there are stops all over the country. Here is the official tour schedule.

I will be attending the event at The Ivy Bookshop and will cover it here on the blog. If you happen to be there, do let me know. I would love to say hello.

In the meantime, I thought I would celebrate this exciting tour with a review of one of Mr. Rankin’s more obscure works. Hope you enjoy!

Dark Entries is a graphic novel written by Ian Rankin and illustrated by Werther Dell’edera. The work features and extends the mythos of John Constantine – the occult detective who has been a staple of the DC Comics family since the mid-1980s.

The plot of this graphic novel centers around a television reality show called Dark Entries. Much like Big Brother, this show involves a group of strangers brought together to live under the same roof as the public at large watches them nightly via television. In the case of Dark Entries, the producers plan to scare the contestants using various techniques throughout the season. Except that it seems some of the contestants are suddenly having visions and nightmares, which appear to be “real,” rather than engineered by the production team. 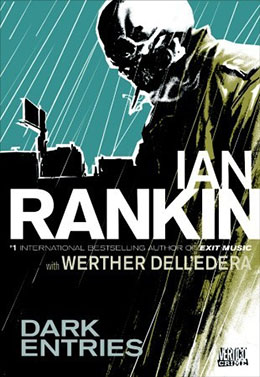 This is when they call in John Constantine. John enters the Dark Entries house with a mission of finding out what is going on with the contestants – what he discovers is far worse than he anticipated.

Ian Rankin deploys his skills as a mystery novelist in the first half of this graphic novel. As he doles out small bits of information about the television show, the contestants, and John Constantine, readers try to piece them together to form a larger picture.

Halfway through, events take a major turn and the graphic novel becomes much more of a traditional horror tale – not unexpected with Constantine as our guide. Ian Rankin certainly has fun with the concept and given how denigrated reality television is, readers are sure to delight in his satirical skewing of the genre. Rest assured, the mystery of how the contestants are connected to each other and why they are involved in the show is revealed in a very satisfying manner.

Even though the drawn elements are in black and white only, this graphic novel is only recommended for those that enjoy both horror and mystery elements – there are certainly some macabre images throughout. For those on-board with that, Dark Entries will be a hell of a ride.