Rupture begins with a very unsettling and creepy set piece: Róbert – loving husband and devoted stepfather – is awoken by an unusual noise in another room. Going to investigate, Róbert finds the outside door to their home is open and there are wet footprints on the floor – footprints that lead directly to the master bedroom door. With that five page sequence, Ragnar Jónasson once again grabs readers by the throat and there is simply no turning back.

Rupture is the fourth book in Ragnar Jónasson’s Dark Iceland series to be skillfully translated into English by Quentin Bates. Despite the ominous sounding series moniker, all of the Dark Iceland books are traditional mysteries devoid of excessive violence, language, or sexual situations. What they are not missing, however, is relatable characters, complex plots, and an inherent understanding of human nature. 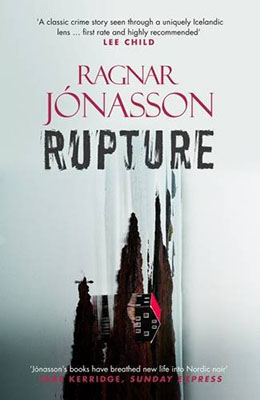 As with all of the books in the series, Rupture features multiple storylines that intersect and diverge at critical points throughout the narrative. Jónasson’s ability to juggle these various threads effectively while still keeping the books extremely tight and streamlined makes his novels unique within the genre as a whole and within the Scandinavian influx in particular.

In Rupture, the town of Siglufjördur is under quarantine after a viral outbreak. To pass the time, series hero – Ari Thór – agrees to look into an odd case from Iceland’s past. In the mid-1950’s, two couples decided to move to a remote and uninhabited fjord. Eventually, one of those women ended up dead from an apparent suicide; however, a relative has recently uncovered a photograph from back then which features a fifth individual no one can identify. With the help of newspaper reporter, Ísrún (who is outside the quarantine zone), Ari Thór begins to piece together the shocking truth of happened that fateful season out on the fjord.

Meanwhile, Róbert is trying to determine who might be stalking his family and more importantly, why. When his stepson goes missing, it’s clear that time is of the essence in terms of figuring that out. Possibly tied into this is the hit and run death of the Prime Minister’s childhood friend, Róbert’s own murky past, and a stranger attending therapy sessions to deal with grief.

It wouldn’t be a Dark Iceland novel if there weren’t some complications for Ari Thór on the personal front as well. The complications this time have the potential to have a long-standing effect on Ari Thór and Kristín, so readers will be anxious to see how this works itself out.

Through it all, Ragnar Jónasson manages to make isolation a recurring element – as both a theme and a motive. In Rupture, he alters the Golden Age literary trope of the locked-room mystery to give readers a historical tale that feels modern in its sensibilities. The fact that Ari Thór would go to these lengths to get an answer for a fellow citizen speaks to what a stand-up guy he is. Ari Thór, could easily be a foreign relation to Louise Penny’s Armand Gamache. These are good men doing good work in a world where trouble thrives.

Few writers are able to cast a spell as quickly as Ragnar Jónasson. His stories are magical, nostalgic, dark, and utterly evocative. Do yourself a favor and enter the world of Dark Iceland – you will be entertained, you will be surprised, and you will be changed.