When SJI Holliday’s debut novel, Black Wood, appeared in 2015, it was immediately clear that she was not going to follow standard genre conventions. Just as she did with that novel, the second in the series – Willow Walk – defies expectations while still telling a gripping crime story.

As part of the Banktoun trilogy, Willow Walk does feature some overlapping characters with the earlier novel. However, just as Davie Gray (the detective) wasn’t really the focus of the debut, he again plays a minor, yet significant role in Willow Walk. Here the story really belongs to Davie’s girlfriend, Marie.

And what a story it is. 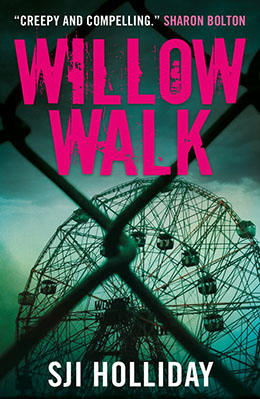 When an escaped inmate attacks a local woman, Sergeant Davie Gray is tasked with re-capturing him before he can harm anyone else. Little does he know, but this man – Graeme – has a connection to Marie (and her mysterious past). Holliday repeatedly interrupts the depiction of the investigation to give readers a sampling of the letters Graeme has written to Marie while he was incarcerated. Those letters grow increasingly menacing and eventually the twisted history between these two individuals is revealed.

Meanwhile, the town of Banktoun is also facing a crisis because teenagers are dying after experiencing the effects of a new, legal drug that has entered their environs. This epidemic seems to be centered around the local fairground and somehow the supply must be stopped before more deaths occur.

Needless to say, these two storylines do intermingle, interact, and influence each other – but certainly not in ways that would be considered pedestrian. SJI Holliday has a knack for skirting convention. Her plots are complex without being convoluted; populated with relatable characters in realistic – though unusual – quandaries.

Willow Walk is a fast-paced read. By varying the viewpoint and focus throughout the novel, Holliday is able to keep readers turning pages, anxious to know exactly what is going on just under the surface. Voracious readers will undoubtedly guess the true connection between Graeme and Marie fairly quickly, but in many ways that only makes the eventual reveal all the more shocking. That is a contradiction, but few authors can do sinister as well as SJI Holliday does in these two novels.

Since this is a trilogy, the third book – The Damsel Fly (available now) – will also feature Sergeant Gray and other familiar faces from around Banktoun. It is also likely to be creepy as hell! Readers who have not yet experienced the talents of SJI Holliday are encouraged to give her work a try – but they are also advised to leave the lights on.

Disclaimer: A finished copy of this title was provided to BOLO Books by the author. No review was promised and the above is an unbiased review of the novel.