The dense relationship between Rebekah Roberts and Saul Katz has been one of the cornerstones of Julia Dahl’s series of mystery novels set in and around the Hasidic community of Brooklyn, New York. Through all of their highs and lows, Saul has always been important to Rebekah: as father figure, mentor, source, and above all, friend. It is no accident that Saul plays a pivotal role in Conviction, the third novel is this award-winning series.

After she stumbles upon a case of a man claiming innocence, Conviction finds Rebekah Roberts looking into a crime from the past in which the wrong man may have been punished. The genesis of that crime can be traced back to the difficult race relations between two groups: the Hasidic Jewish community and the African-American citizens who populate Brooklyn in the 1990s. 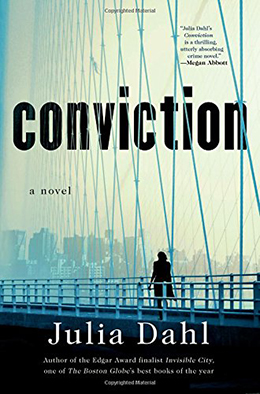 Through two timelines – the actions around 1992 when the crime originally occurred and Rebekah’s journalistic investigation of those events in 2014 – Julia Dahl exposes readers to part of our nation’s history, the ramifications of which still reverberate. Given the state of division in our present day, Conviction feels very timely and while there are no easy answers provided, the novel certainly furthers the important conversation surrounding race relations in our country.

So often, history is viewed as events from way in the past. By focuses her attention on events that occurred in most of her reader’s lifetimes, Julia Dahl highlights just how volatile impressions can be when they are so fresh in the minds of the populace.

Julia Dahl is gifted with a highly readable writing style that allows the reader the breathing room necessary to contemplate the deeper life questions that rest just under the surface of her words. Clear-cut heroes and villains are in short supply in Dahl’s depiction, just as one would expect in a rational examination of such critical and complex concerns.

Conviction works perfectly fine as a stand-alone novel, though readers who have watched Rebekah’s association with the Hasidic community shift through previous events will no doubt have a more visceral reaction to her involvement in this particular case. Either way, I cannot imagine readers not wanting to know more about Rebekah Roberts upon finishing this novel.

It is no exaggeration to say that Conviction is the current high-point in one of crime fiction’s greatest series. By allowing readers to glimpse behind the curtain of an insular community, with a captivating guide like Rebekah Roberts leading the charge, Julia Dahl can open both minds and hearts.