Ragdoll is Daniel Cole’s debut novel. From the description, it sounds like another gruesome serial killer novel designed to shock reader’s sensibilities. Please know this couldn’t be further from the reality. Daniel Cole has launched his writing career with a creative plot that is very difficult to pin down in short platitudes.

First and foremost, Ragdoll is a true ensemble piece. Disgraced detective, William “The Wolf” Fawkes may be the focal character, but in a way that is rarely seen in crime fiction, every single other character in the story gets depth and growth. This may sound like a recipe for confusion, but readers quickly learn to care about this entire team – and make no mistake about it, even when they are not always in agreement, they are never anything less than a team.

After a brief but important prologue, the cinematic plot of Ragdoll kicks into gear very quickly. When a body – albeit one with body parts stitched together from six different victims – is found in a London housing complex, the newly reinstated Fawkes and team are called in to investigate. 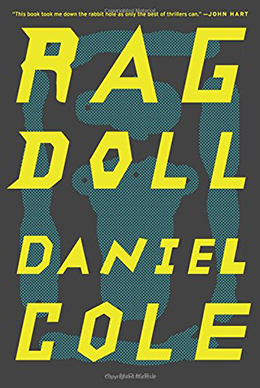 At the same time, a note detailing the dates of future murders – and the names of those intended victims – is delivered to Fawkes ex-wife, a television reporter looking to reach celebrity status. It should be fairly easy to stop these crimes, right? Think again. Daniel Cole manages to thwart the reader’s expectations – not to mention those of his fictional investigative team – at every turn. How many will have to die before this madman can be stopped?

Ragdoll is an interesting hybrid between mystery and thriller. Certainly there is the puzzle at the center of the plot: why have these particular people been chosen to die? – but the countdown aspect adds a sense of immediacy, excitement, and danger more in line with the thriller genre. In another unexpected element, Ragdoll also happens to be quite funny with both dialogue quips and moments of dark humor bringing some much needed relief from the tension. With all that in mind, you can see why the genre is so hard to pin down.

Fans of abbreviated fiction will also notice that many of Ragdoll’s chapters – particularly those detailing Wolf’s time in a mental hospital following the fallout from the prologue – read like effective short stories. The word-precision that is a hallmark of the short fiction format is evident throughout Ragdoll, but particularly so in those flashback moments.

By the end, these characters will have become friends to the reader. Leaving them behind proves very difficult, but thankfully it seems as though we will get to see them all again very soon – well, at least those that are still alive anyway. Daniel Cole’s Ragdoll is a crime fiction debut you cannot afford to miss.

(Click here to visit the publisher’s page with links to buy the book.)