On October 10th, 2017, Sid the Skeleton returns in the next novel in Leigh Perry’s cozy mystery series. The Skeleton Paints a Picture is the fourth book in this humorous paranormal series. If you have not yet met Sid and his crazy band of cohorts, please check out the previous books in the series: A Skeleton in the Family, The Skeleton Takes a Bow, and The Skeleton Haunts a House.

And without further ado, let’s take a look at the cover of Sid’s latest adventure. 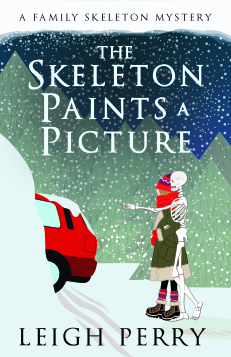 Adjunct English professor Georgia Thackery has a new job teaching at Falstone Art and Design University, known as FAD to its students and faculty. It’s lonely being isolated in a borrowed bungalow during a winter of record-breaking snow, until, that is, she receives a package containing her best friend, Sid. Sid is a walking, talking skeleton who has lived with the Thackery family since Georgia was six. She’s used to the oddities of having an ambulatory bag of bones as a best friend, but for him to mail himself to her is unusual, even for Sid. It turns out that Sid, who normally lives with Georgia’s extremely busy parents, was lonely, too.

The two of them make plans for a cozy semester: reading, watching movies, Georgia grading papers and doing research while Sid games and works on homework for his online class. It might have worked out that way if Sid hadn’t gone out wandering the first night and spotted a crashed car. When they go to investigate, they find the driver, apparently dead from the crash.

Initially police think it’s an accident, so Georgia and Sid think that’s the end of it–until Georgia finds out the body she found hit closer to home than she’d realized…

Pre-Order: The Skeleton Paints a Picture at Amazon now!