Seven Suspects is the third book in Renee James’ crime fiction series featuring transgender hairdresser, Bobbi Logan. As she did with the previous novels, Renee James opens the door to a world unfamiliar to many readers, allowing compassion and respect to harness their hearts.

The crime fiction world needs a character like Bobbi Logan and Renee James is the perfect author to bring her to life. As Seven Suspects opens, Bobbi is still dealing with symptoms of post-traumatic stress induced by the rape she previously suffered. Being a trans woman, Bobbi tends to be extra tuned into her surroundings and the actions of those around her; so when she begins to experience an ominous feeling of being stalked, she takes it very seriously – especially since she is currently watching her eleven-year-old “niece” Roberta while Betsy (Bobbi’s pre-transition ex-wife) is off on vacation. 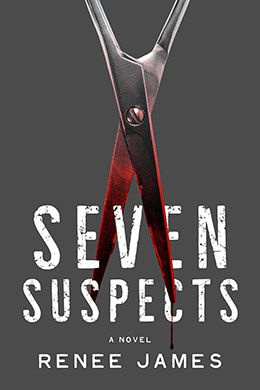 This is probably a good place to say that as confusing at all this sounds, Renee James is masterful at making the reader feel comfortable in this world – even for those new to the series. The writing flows with such ease that readers immediately trust the process and quickly find that all the past connections and issues feel familiar. This is especially important here, as an emotional sub-plot dealing with how children react to transgender individuals packs quite the punch.

Once Bobbi determines that she really is being watched, she makes a list of the most likely suspects – those with possible reasons to dislike her. With no proof to convince the authorities, Bobbi goes about researching each individual on her own. Readers know how difficult it can be to create convincing motives for an amateur sleuth to become entangled in an investigation, but with Seven Suspects, Renee James makes it look easy.

There is a sense of imminent danger throughout Seven Suspects, but there are many lighter moments as well. Renee James really ushers readers into Bobbi’s life. Episodes detailing her interactions with her friends and her “family of choice,” her experiences on the dating circuit, and her professionalism as the owner of a successful business enterprise all expose important aspects that make Bobbi Logan a fully-formed character that readers will champion.

Seven Suspects could easily have become a didactic exercise intended to teach readers about the transgender experience. However, by wrapping the subtle lessons within a compelling suspense plot, Renee James instead leads readers to connect with Bobbi as a person first and foremost, thereby allowing the rest of the equation to develop organically. The transgender experience is a welcome addition to the crime fiction repertoire and hopefully, Renee James and Bobbi Logan will be around for a very long time.