As you have no doubt noticed, things have been quieter than normal here at BOLO Books. That is because this past week/weekend was Bouchercon – the annual international crime fiction convention, held this year in Toronto. It was a wonderful event and there will be a recap here on the blog soon.

But meanwhile, the publishing machine continues. I am thrilled to welcome Neil Plakcy here today to tell us all a bit about the journey to and through his new Angus Green novel, Nobody Rides For Free. You may remember that last year, I loved and reviewed the debut novel in this new thriller series. Check out the BOLO Books review of The Next One Will Kill You for a taste of this series and check back next week for a review Angus Green’s return. For now, let’s see what Neil has to say. 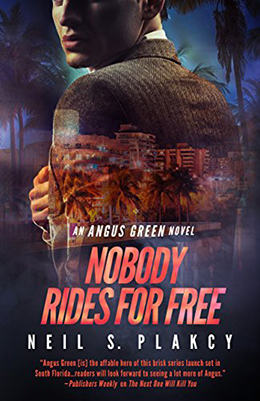 A Swing and a Miss by Neil Plakcy

After several false starts, at least two drafts, and months of work I was finally able to submit the manuscript for my second Angus Green book, Nobody Rides For Free, to my editor.

What a sigh of relief! I planned to sit back and wait for the fulsome praise to come through.

However, that wasn’t to be. Instead a few weeks later I received a three-page single-spaced letter of comments on the manuscript, which could be summed up in one pithy sentence: “Let’s call this a swing and a miss.”

I was shattered. This wasn’t my first time at the rodeo; how come I couldn’t put together an acceptable manuscript?

To figure out what was wrong I had to go back to my inspiration for the book. About two years ago I attended an all-day workshop sponsored by the FBI’s InfraGard program. According to the FBI website, “InfraGard is a partnership between the FBI and … business executives, entrepreneurs, military and government officials, computer professionals, academia and state and local law enforcement.” The goal is not only to inform the public about threats, but also to provide contacts to pass on unusual, possibly dangerous security breaches that those in the field might notice.

I first learned about InfraGard through my attendance at the FBI’s Citizen’s Academy, and because of my interest in computer security, and my work as a college professor, I was eager to follow up—and of course, look for inspiration for cases Angus Green could investigate.

One of the agents at the InfraGard event told a fascinating story about an American contract employee working on a U.S. military base in Honduras, eventually convicted of stealing military secrets. When the FBI seized his computer, agents discovered a cache of child pornography on it, as well as evidence that implicated him in trafficking in minors for sex.

I was fascinated by the way one investigation led to another that was seemingly unconnected. That case hung around the back of my mind until I went looking for the plot for my second Angus Green book.

My first draft began with a case very similar to the one I had heard about: a government employee in Chicago who was suspected of terrorist ties had his computer seized, and pornographic materials featuring underage individuals were discovered on the hard drive.

One of the videos appeared to have been made in South Florida, so the investigation broadened to include the Miami office. Another agent asks Angus to view the video and he discovers an important clue in the background, which spurs his involvement.

My editor’s comments forced me to examine what the case really was and why it was an important one for Angus to solve. Why would the case originate in Chicago—why not in South Florida? Pornographic material that involves children is so awful that the very idea overwhelmed the book, so I scaled back to focus on a single video involving a fifteen-year-old boy.

Because Angus is a young gay man himself, he relates to this anonymous boy, and that spurs his determination to find and rescue him. Finally I had a case that mattered to Angus on a very personal level.

One of my goals in writing about Angus is to show off the unique criminal landscape of South Florida, where I have made my home for the last thirty years. I reached into the newspaper headlines to create a scenario where a young civil servant makes a dangerous mistake. He ingests a drug like the one that has transformed several young men into face-eating zombies and it’s on his computer that Angus finds the video—which has its own very local connection.

That gave me a satisfying arc for his emotional journey, and gave additional meaning to the title. From then on it was a slog to make sure that every step of the way his investigation related both to the case and to that personal realization.

As a professor at a Florida community college, I have learned how vulnerable young people can be to financial, family or personal tragedy. LGBT students have confided in me terrible stories of being beaten or exiled by their families due to their sexual orientation, so telling this story had a deep personal impact to me as well.

These plot changes required a great deal of revision and polishing, but with every page Angus’s focus on saving these two boys and others like them became clearer and more meaningful. I hope readers will feel the same way.

Nobody Rides For Free will be out on October 24.  Pre-order today!