The striking cover for Liv Constantine’s The Last Mrs. Parrish may initially draw readers in – with its Art Deco styling, the lux color combination, and “dangerous” font – but it is the story within that will ultimately prove to be the biggest enticement. The Last Mrs. Parrish is a debut worthy of hosting its own cotillion ball.

The first two-thirds of The Last Mrs. Parrish document the efforts of Amber Patterson as she attempts to insinuate herself into the lives of the Parrish household. By befriending Daphne Parrish, Amber is able to manipulate her in multiple ways – all with the same goal in mind: stealing Daphne’s husband, Jackson Parrish, for herself. 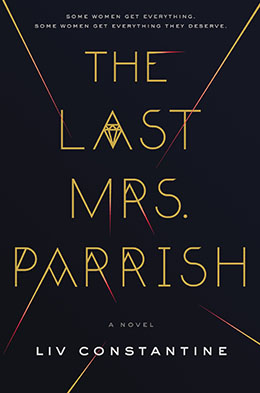 In this section of the novel, Liv Constantine skillfully exposes the character of Amber Patterson. While readers are not meant to “like” her, it is impossible to deny that Amber is a captivating individual. Few readers would want her as a friend, but those same readers will delight in watching her machinations. The high level at which Amber is honing her game is both fascinating and scary.

The Last Mrs. Parrish is advertised as a psychological thriller – and it is that, but not in the traditional sense. What sets the reader’s nerves on end is watching how easily humans are manipulated. We all know that people believe what they want to believe, not necessarily what is right in front of their faces, but seeing that play out on the written page will make even the most trusting reader looking over their shoulders a bit more than typical.

Then, along comes the second large section of The Last Mrs. Parrish in which everything the reader thought they knew is thrown into question. Too many spoilers abound to say much here, but Liv Constantine impresses with her ability to navigate repetitive ground while making this new narrative equally gripping. No doubt, there will be readers who prefer this section, again for reasons that would be too much of a spoiler.

The final shorter coda to The Last Mrs. Parrish features chapters that alternate between Amber’s and Daphne’s point-of-view. The resolution to this novel was going to be both important and difficult, but Liv Constantine makes it look easy. If there is one complaint it would be that this section moves at a heady clip compared to the more languid momentum of the overall novel. This was likely intentional, as by this point, readers will be itching for some retribution.

One final element worth noting: Liv Constantine is actually a writing team, two sisters publishing under a pseudonym. I challenge any reader to attempt to find written evidence of this within the text. However this teamwork played out, the final result is so seamless no one would ever suspect there were multiple hands involved. Like myself, readers will be hoping they are well into their next effort because The Last Mrs. Parrish was a most exciting debut.