The Last One – The BOLO Books Review

Recently released in paperback, The Last One by Alexandra Oliva is a contemporary thriller that takes aim at two of modern society’s obsessions: reality television and dystopian futures.

At the core of The Last One is a new survivalist reality competition show in which twelve citizens are left to fend for themselves within the wild – of course, there are cameras and a host who occasionally challenges them with tasks to win rewards, so like with any reality show, how much risk is there really? That is until things seem to go off the rails. The host’s interjections become less frequent (and eventually they stop completely); the cameramen stop showing up to film the monologues; and the contestants become more and more isolated (from society and from each other). 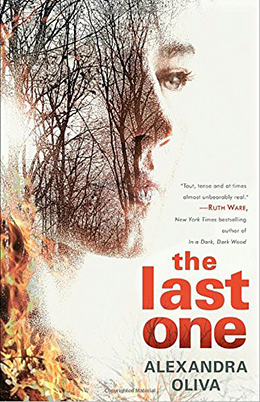 Told in alternating narratives, the tension within the story remains thick throughout. One point of view is from the production side of the television show. Characters are referred to by their unofficial “role” on the show – black doctor, Asian chick, gay cheerleader, etc. Anyone who watches reality television will recognize the token nature of having a “diverse” cast, so this presents as effective satire rather than offensive stereotyping. It is in this half of the story that readers begin to suspect that something has gone terribly wrong behind the scenes.

The other point of view is from one of the female contestants. It quickly becomes obvious that her sections are set well after the filming of the show began. She is now alone and literally struggling to survive. In her section, the other contestants are referred to by their names, so readers are left to match up which “production stereotype” matches which actual person. It is in this section that readers finally begin to understand the gravity of the situation and how these twelve people placed into isolation for entertainment purposes have no idea what is actually happening out there in the real world (not to be confused with the MTV reality show of the same name.)

Because of the dual narrative, readers always know just a bit more than the characters, but never enough to keep them from wondering what exactly is going on. Alexandra Oliva has done a masterful job of obscuring where the line between reality and reality TV really resides?

As one would expect, there are action set-pieces within The Last One, but much of this novel focuses on the psychological impact of participation in such a reality show. Believe me, everyone has a reason for being there. Clearly, readers are meant to learn the most about the main female character, but the introspective nature of her narrative still crackles with danger on a more massive scale. When she eventually meets another person – one whom she believes is another surprise contestant, but whom readers know is anything but – what was a solo survivalist tale becomes a thrilling story of joint endurance.

The Last One is a promising debut from Alexandra Oliva, Her blend of exciting tableaus and contemporary culture is both fascinating and enlightening. Readers will be anxious to see what she delivers next.

Buy Links: The Last One by Alexandra Oliva